Kerry Harrison and Nicci Robertson are the founders of Free2RunSA (Photo: Supplied)

It should be one of the easiest things in the world: you grab your gear, tie your trainers and hit the road for a rejuvenating run.

But danger is often lurking around every street corner and joggers have fallen prey to criminals out to rob them of everything from their phones to their shoes. Which is why two women from Bryanston, Johannesburg, decided to take matters in their own hands and come up with a safer way to get their regular running fix.

The idea came about after a spate of attacks on runners and walkers in their area during lockdown. 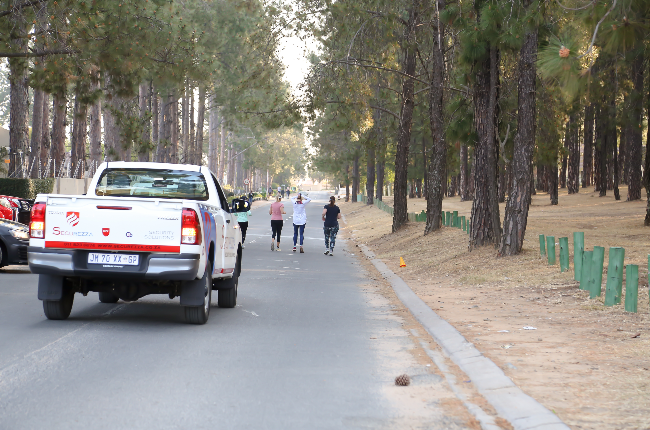 Kerry was nearly the victim of an incident, she tells YOU. “My friends and I were running and there was a car following us, driving slowly up the road,” the 38-year-old recalls.

“We went into the security complex nearby and waited for the car to pass.”

Kerry had become increasingly worried about safety after a surge in crime after level 5 lockdown regulations were eased and specific exercise times were granted. “This was the perfect opportunity for criminals to target people,” she says. “Criminals knew exactly when people would be out and about.

“Every time I went out of my gate I was terrified. I’d just had enough and felt like everyone was complaining about it but not much was being done to create a solution.”

That’s when the mother of two reached out to her Facebook community group in the hope of taking back their streets and restoring safety.

“On 3 July I posted on Facebook pleading with the community for help. I shared a post suggesting that runners collaborate with neighbourhood security,” she says.

“I wanted to find a main exercise route that could be patrolled and monitored during peak hours.”

According to Kerry, who has been a runner for four years, the response was overwhelming. “All the security companies in the area put up their hands and volunteered to help.”

And so Free2RunSA was born. A local newspaper carried an article about it and Nicci, founder of lifestyle initiative Re-Invent Health, got in touch with her. The two collaborated to expand their community running routes.

The pair use Google Maps to examine which are the busiest routes in Bryanston – the busier the road, the safer the area – then set up running routes. “We’ve created a 15km route, which caters for runners and walkers,” Kerry added.

“This route is patrolled by all four neighbourhood security companies during peak hours – so from 6am to 9am and from 4pm to 5.30pm. There have been fewer attacks on runners and I feel safer running on those routes now.”

Elyse Golovey of CAP Security says crime in the area was 33% lower at the end of August, and Charnel Hattingh of Fidelity ADT says there has been “a significant decline” in the number of attacks on runners since the initiative was launched.

The patrolled running routes are usually shared on the Free2RunSA Facebook page as a Strava link, a mobile app that gives multiple users access to synced routes.

“We’re also looking to create more routes all over Joburg and even beyond,” Nicci says. “A lot of people have asked for safer routes in their neighbourhood.”

Kerry and Nicci are open to helping people build similar hubs in their areas. “It’s been great to see how well received this has been, to see how other people want to make their communities safer,” Kerry says.

Everyone should have the right to run from their homes and not drive to a safer environment, the pair believe.

Free2RunSA is in the process of launching additional patrolled routes in Douglasdale, Blairgowrie and in Durban North. Kerry and Nicci are open to helping people build similar hubs in their areas. (Photo: Supplied)
Safety tips for exercisers
We live in a world where facts and fiction get blurred
In times of uncertainty you need journalism you can trust. For 14 free days, you can have access to a world of in-depth analyses, investigative journalism, top opinions and a range of features. Journalism strengthens democracy. Invest in the future today. Thereafter you will be billed R75 per month. You can cancel anytime and if you cancel within 14 days you won't be billed.
Subscribe to News24
Related Links
Your fitness tracker could be incorrect
I weigh 37kg but I can’t eat: local mom wastes away after stomach ulcer treatment
Woman’s dramatic transformation after losing 39kg
Next on You
The Bachelor SA’s Lee Thompson has gone from TV stardom to a homeless shelter