Dancing in the streets: retired ballerina brings the joy of dancing to poor communities 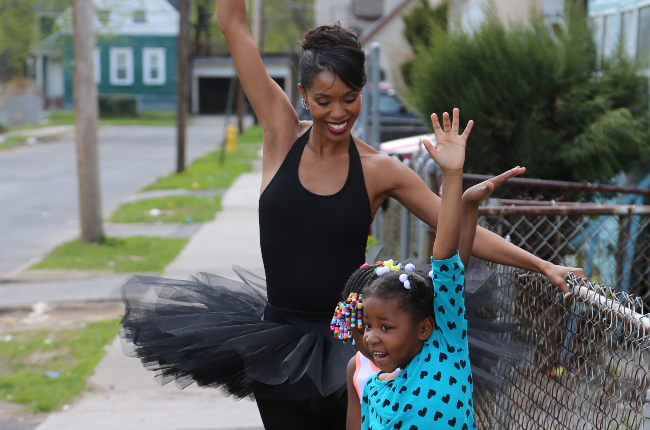 Aesha Ash created the Swan Dreams Project in 2011 to help kids see the world through the beauty of ballet. (Photo: Thaler Photography)

Think of ballet and what comes to mind? For many, it’s grand concert halls, elaborate stage sets, immaculate costumes and upscale audiences.

But one dancer is changing that elitist perception of the art form by bringing ballet to the streets – quite literally, one pas de deux at a time. Ballet should belong to everyone, Aesha Ash believes, and it’s her mission to empower women and children from underprivileged communities through the power of movement.

For most of her professional career, Aesha was the only black dancer in the elite New York City Ballet troupe and for more than a decade she gave everything she had to the world of dance. She decided to retire in 2007 at the age of 29 and had planned to work as a waitress in New York while she “figured it out”. But then a young black woman approached her in a shopping mall one day. “We’re just so proud of you,” the stranger said. “She kept using the plural, but she was alone,” Aesha recalls.

“I understood exactly what she meant. She was talking about the black dance community.” With tears in her eyes, Aesha told the young woman she’d soon be leaving dance. To her surprise, the woman started crying too. “She said, ‘The impact you’ve made. . . it won’t be forgotten,’” Aesha says. “Of course, it was raining. How much more romantic and tragic could it be?” And that was all it took to put her on a new trajectory.

It’s now more than a decade since she hung up her professional ballet shoes, but Aesha has never stopped dancing. She’s simply traded the grand stages of America and Europe for the littered streets of impoverished neighbourhoods. Photographs of a tutu-clad Aesha dancing around innercity neighbourhoods, such as the streets of Rochester in New York where she’s from, have gone viral.

She’s since started the Swan Dreams Project, a self-funded programme focused on breaking down the stereotypes black women face. “One of the things I want people to understand is that this project is so much bigger than ballet,” Aesha explains. It’s about building self-esteem, she adds, and “showing that black women are multi-dimensional people too”. The photos are taken by Aesha’s family members, who follow her as she dances in impoverished areas. (Photo: Thaler Photography) The photos are taken by Aesha’s family members, who follow her as she dances in impoverished areas. (Photo: Thaler Photography)

She was only five years old when she was enrolled at the Joyce Winters School of Dance in Rochester, joining her older sister, Katrina. “It was just a natural fit for her,” Costello Ash, Aesha’s mother says.The family couldn’t afford to send both girls to classes, but Joyce recognised Aesha’s talent and offered her a scholarship. At first Aesha wasn’t interested in ballet. Jazz and tap grabbed her attention as she had her sights set on a career on the stages of Broadway.

But she eventually lost interest. Both dance genres required participation in competitions, which she didn’t enjoy because she suffered from stage fright. She gradually became more intrigued by ballet and when she turned 10, she changed direction. At 14 she was offered a scholarship to the prestigious School of American Ballet in New York City.

Four years later she was accepted into the New York City Ballet and lived her dream, travelling the world and doing what she loved. But something her mother told her right at the beginning of her ballet journey stayed with her: don’t expect to see many black girls in your dance troupes. There was no escaping it. “When you’re a minority in a space, you feel that as soon as you walk into a room,” Aesha says.

“It’s lonely because the other dancers didn’t share my unique story; they didn’t share where I came from and the added challenges of being a woman of colour and feeling isolated – feeling as if I didn’t belong.” She recounts a few incidents in particular that stung. During a rehearsal, a dance supervisor was furious when some of the white dancers got suntans. The trainer declared she didn’t “want to see one tanned body on stage”.

It made Aesha question where she fitted in. On another occasion a makeup artist seemed puzzled by what to do with her skin. She also had to endure snide remarks from an audience member who complained of how “distracting” it was to have a black dancer on stage.

Now a 41-year-old mom of two, Aesha is no stranger to pushing through the adversity created by systemic racism. Which is why The Swan Dreams Project was started. Through the project, started in 2011, Aesha takes the beauty of ballet to struggling communities. Her hope is that the photographs depict two worlds separated by a divided society. The pictures are taken by Costello’s cousin, Arleen Thaler, and her husband, Daryl. They show that even in a community plagued by poverty and violence, the beauty of art has a place.

“When you look at the photos . . . even the guys have stopped [to see Aesha] and are amazed,” Costello says of the community’s reaction. But Aesha’s work hasn’t stopped there. Two years ago she launched the Swan Dreams Project camp in Rochester. During the camp, kids are taught ballet and about nutrition and etiquette and at the end of the five days the youngsters, almost all of them African American and Latino – and new to ballet – perform a choreographed piece for their family and friends.

They’re also taught basic French, which Aesha says is “the language of ballet”. Her children, Alessia and Salvatore Ruello, don’t mind sharing their mom with the community. “It’s amazing seeing my mom do all this stuff for all these kids,” Alessia says. Salvatore shares his sister’s sentiments: “No matter what skin colour you are, you’re a person like everybody else and you should be treated the right way. We live in a world where facts and fiction get blurred
In times of uncertainty you need journalism you can trust. For 14 free days, you can have access to a world of in-depth analyses, investigative journalism, top opinions and a range of features. Journalism strengthens democracy. Invest in the future today. Thereafter you will be billed R75 per month. You can cancel anytime and if you cancel within 14 days you won't be billed.
Subscribe to News24
Related Links
Cape Town dad-and-son duo paddle to Robben Island on makeshift raft
Local woman living with a birthmark on her face: ‘People looked at me like I was dirty’
Umlazi baker boys hustling hard to deliver breakfast for the busy — and create jobs for 14 young...
Next on You
From Bafana to Man U: a look at Benni McCarthy's road to the Red Devils