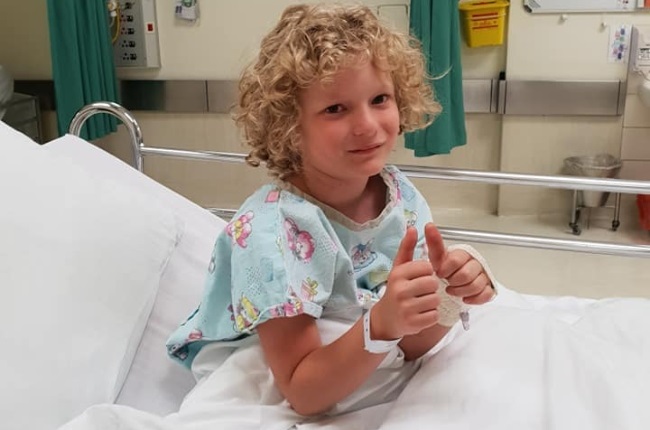 Jayvan Janse van Rensburg was diagnosed with an aggressive form of bone cancer in 2016. (Photo: FACEBOOK)

He’s only seven years old but this little boy has been under the knife a staggering 60 times – and he’s still smiling.

For most of his short life, Jayvan Janse van Rensburg has been in and out of hospital for surgery and treatment for an aggressive form of bone cancer.

He recently had his 60th surgery in five years to replace a broken plate in his leg which was implanted less than a year ago.

Jayvan has cancer in his right leg and most of his right femur has been removed. By 2019 there was very little bone left in his leg – just 2,7cm in the thigh and less than 4cm below the knee.

The little boy has had several ops to implant a plate to attach the upper and lower part of the bone and his mom, Carin, took to Facebook to update friends and followers after his most recent surgery to replace the broken plate.

“Jayvan is safe out of theatre. Thank you, Lord for your grace, your love. Eternally grateful.”

Jayvan, who’s from Vereeniging in Gauteng was diagnosed with cancer in 2016, a year after his dad was shot dead in a robbery in nearby Drie Riviere.

For Carin, a mom of six, her son’s cancer battle is like a nightmare without end.

“My heart is exhausted, broken and tired,” Carin wrote on the Facebook page Support Jayvan Janse van Rensburg last week. “I’m despondent, angry and sad – all at the same time.”

Before his latest operation, Carin had to decide if she wanted her son to have the op done in SA or overseas, or if his leg should be amputated.

After the surgery last year to implant the plate, Carin told YOU that was probably the last attempt that could have been made to save Jayvan’s leg. But when the plate broke, her son was determined to go under the knife to keep the leg.

“He wants to try the surgery again,” Carin says. “He said, ‘Mommy, please, I want to keep my leg. Mommy, the doctor can fix it’.”

Thankfully, Carin explains, “there was enough new bone growth in the past to give it another go”.

“We’re replacing the plate and screws with bone grafts where the bone didn’t grow.”

An amputation, she said, would have a serious impact on Jayvan’s life. Because of the extensive damage, the leg would have to be amputated at the hip which would make wearing a prosthetic impossible.

Jayvan was in a lot of pain after the surgery but he’s doing well now, his mom says.

“His mood is much, much better. He just wants to go to school – he misses his friends.”

For now, Carin and Jayvan are taking each day as it comes.

We live in a world where facts and fiction get blurred
In times of uncertainty you need journalism you can trust. For 14 free days, you can have access to a world of in-depth analyses, investigative journalism, top opinions and a range of features. Journalism strengthens democracy. Invest in the future today. Thereafter you will be billed R75 per month. You can cancel anytime and if you cancel within 14 days you won't be billed.
Subscribe to News24
Related Links
‘Wake up, my child’: mom’s grief for cancer-stricken son who died fending off robbers
This Hermanus mom has much to celebrate on International Childhood Cancer Day
A nearly unrecognisable Jeff Bridges delighted to announce his cancer treatment is working
Next on You
I'm the woman in the viral video and it was as bad as it looks – but I'm finally free of my abuser, Jaco Swart