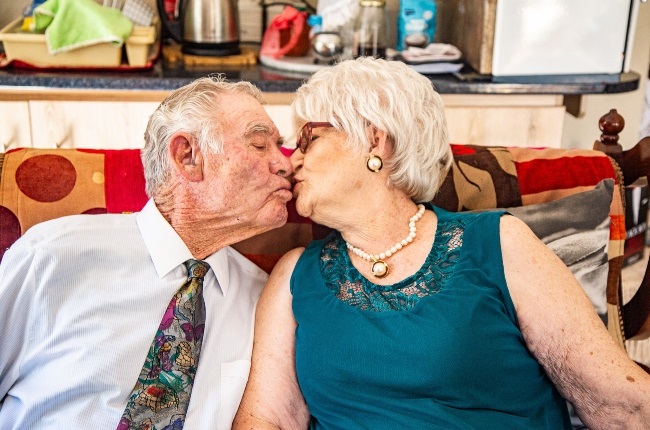 She’d been a widow for 20 years and thought she would be spending her twilight years in quiet comfort, enjoying her children, grandchildren and great-grandchildren. Walking down the aisle again was the last thing she imagined – much less beside the man who used to be married to her sister.

But when Kosie Pieterse asked Sus Jones to be wife, she knew she wanted to spend the rest of her life with this man. And so, at the age of 82, Sus said “I do” to 95-year-old Kosie – and proved once again that there’s nothing stopping true love. Especially not age.

“He proposed and the next thing I knew I was in his arms,” Sus says.

Some people have questioned why they decided to get married – at their age, why not just live together?

But Kosie says that was never an option. He wanted it all, the ceremony, the reception, the signing of the register – everything.

His “hourglass”, as he calls it, may be running low but he wanted to make her his wife and live together happily ever after.

Kosie proposed in January and barely a month later they married at the Unity Guesthouse and Venue near Vryburg in North West where they live. Sus, wearing a stylish turquoise pantsuit and carrying a single protea, walked to the altar on the arm of her brother, Renier van Vuuren (73), where her groom was waiting, smart in a suit and tie.

“I waited a long time for that day,” Kosie says drily.

“It was very special to get married at this age again,” says Kosie, snuggling on the couch with his bride in the lounge of their one-bedroom home in a retirement complex.

“We definitely felt we couldn’t just live together,” Sus says. “We care for each other. We share interests and we love each other. Why wouldn’t we get married?”

Driving into Vryburg, you’re greeted by masses of sunflowers growing wild among the homes – and it’s clear that in Sus and Kosie’s home, love has found fertile soil in which to flourish too.

The two can’t keep their hands off each other, sometimes intertwining their fingers, sometimes putting a loving arm around each other’s shoulders.

“We’ve known each other for years and years,” Kosie says. “My late wife and Sus were sisters and Sus’ late husband and I were like brothers.”

When they were young, Kosie and Sus lived in the Molopo area just outside the village of Bray on the Botswana border. Kosie was a stud farmer and Sus’ late husband, Magiel Jones, had a cattle farm.

About once a month the area’s young people would get together in Vryburg, the nearest town. Kosie and Sus would never have guessed that they’d settle here decades later – much less as a married couple. “Our farms were just about 15km from each other. Once Magiel and I got married, we visited Kosie and Isabel practically every weekend,” Sus recalls.

“I’m a Kalahari farmer – I farmed there for 60 years,” Kosie tells us. “Magiel and I often went on hunting trips to Botswana, and our wives would go along.”

To this day, that place has a special place in their hearts.

READ MORE | Homeless couple tie the knot: ‘We just wanted to be together’

After a 40-year marriage, prostate cancer claimed Magiel’s life at 63. After his death in 2000, Sus managed the farm for eight years with her three sons’ help.

“I then lived in Vryburg for a while before I moved in with my daughter in Rosendal for a few years. I moved back here in 2017,” she explains.

Isabel and Kosie were married for more than 60 years when Isabel’s health started failing. The couple lived in Bloemfontein for three years to be close to medical care and she died in 2016 of a heart attack.

“It was hard to lose my sister so suddenly,” Sus recalls. “I felt very protective of Kosie and their children.”

His wife’s death hit him hard too, Kosie says. “I grieved and grieved.”

Sus would call every now and again to ask how he and the children were doing and when she had to go to Bloemfontein every six months to see a specialist, she’d stay over with Kosie and his two daughters.

“We’d talk about the old days. We were attracted to each other, but I wouldn’t say there was any physical contact. We just enjoyed each other’s company,” Sus says.

In between the visits they started having regular phone conversations and then Kosie invited her to visit him for a week in January – and popped the question. The couple's kids planned their wedding - all they had to do was get there (PHOTO: Onkgopotse Koloti)

The wedding was organised in a jiffy. “We didn’t have to organise anything – we just paid,” Sus says with a chuckle. “Our two families planned it all. They worked well together because they all know each other so well.”

Sus’ granddaughter, Wourine van Zyl (24), did her hair and makeup. Kosie picked up his bride with a flourish of old-school romance: in a horse-drawn carriage. He held the reins during the short ride into town before the two were taken by car to the wedding venue.

After the ceremony, guests enjoyed a three-course meal.

“To find happiness together at this age is wonderful,” Kosie says.

In the evenings, he and Sus have a stroll in the garden before sitting down to dinner in the dining hall of their retirement complex. While we chat, the village’s manager, Vernon Dettmer, brings in a few bottles of cooldrink and before taking a sip, Sus and Kosie toast each other, staring into one another’s eyes.

“The loneliness is leaving,” Kosie says. “Actually, it’s actually already gone. I’ve found my mate and we love each other.”

A beaming Sus nods. “It’s wonderful to love and to be loved again.”

We live in a world where facts and fiction get blurred
In times of uncertainty you need journalism you can trust. For 14 free days, you can have access to a world of in-depth analyses, investigative journalism, top opinions and a range of features. Journalism strengthens democracy. Invest in the future today. Thereafter you will be billed R75 per month. You can cancel anytime and if you cancel within 14 days you won't be billed.
Subscribe to News24
Related Links
This bridezilla’s 37-rule contract for her bridesmaids may be the worst we’ve ever seen
Wedding crashed by woman claiming to be pregnant with groom’s baby
Lockdown wedding: ‘We cut our budget from R70 000 to R2 500’
Next on You
Still no body, still no answers – devastated family of boy who fell down sewer seek closure

Read more on:
elderlymarriage
LATEST YOU