I can easily drive my car without arms – here’s how, shares disabled Cape Town woman Nicky says her first time behind the wheel was an amazing experience. (PHOTO: SUPPLIED)

“I really can’t understand why everybody doesn’t drive a car that’s adapted like this,” remarks Cape Town psychologist Nicky Abdinor as she cruises along in her modified automatic sedan. “If you have both arms, imagine all the multitasking you can do while you’re driving.”

Nicky, who’s as comfortable behind the wheel as any other motorist, has no arms, and drives a specially modified car with ease.

She was born with Phocomelia, a rare condition that causes malformation of the limbs, but she hasn’t let it prevent her from reaching her dreams and achieving independence – something she wants to help other differently abled people accomplish too.

Her project, the non-profit organisation Nicky’s Drive, raises funds for people with disabilities to modify their vehicles, allowing them to be mobile and independent. So far, they’ve adapted the cars of 15 disabled drivers.

“For me, it was so incredible to learn to drive, and that’s what inspired Nicky’s Drive as a non-profit. I wanted others to know that driving with a disability is possible,” she tells us.

The organisation budgets R15 000 for each car that needs to be adapted, which, Nicky explains, “covers the cost of hand controls and a few extra adaptations which might need to be made”.

“So many people have helped me, and I felt like I needed a way to help others. It’s a very small organization; it’s all self-funded. I just wanted to keep it simple because it’s a way to give back and invest in people,” she adds.

To qualify for assistance, applicants must have their own automatic car.

“There’s an application process and it’s really important that they have an assessment with an occupational therapist, to make sure they are safe to drive because every disability is just so unique,” she says.

Nicky, who has is clinical psychologist by profession, and a motivational speaker, is the only one of her three siblings who was born with her condition. “I was very fortunate that I was born with a very determined personality. I wanted to do absolutely everything with my family and friends. My parents really encouraged me. I was very lucky that they decided to focus on what I can do and not on what I can’t, which has also always been my motto and that approach was very useful for me,” she tells YOU. Nicky has been a clinical psychologist for 15 years. (PHOTO: CAPE VIDEO)

She attended a mainstream school and went on to study psychology at the University of Stellenbosch.

Independence was always important to her and during her university years, it was her dream to be able to drive.

That dream came to fruition in 2002 when, through fundraising efforts and donations, she was able to have a specially adapted car shipped to her from the UK.

“Having a car adapted overseas is extremely expensive, especially with our exchange rate and the import costs. There’s a rebate on import duties that a person with a disability can apply for, but you still need to pay for the car to be shipped here,” she says.

She adds her first time behind the wheel “was an amazing experience”.

Those possibilities led her to her starting her organisation in 2010, and part of her fee from her motivational talks, always goes to Nicky’s Drive. Her motivational talks has taken her all over the world. (PHOTO: ALISON DINGLE)

Nicky still gets emotional when she thinks of the people who have been helped by Nicky’s Drive. She recalls one woman’s story. Her mobility is limited because she contracted Polio as a child.

“I remember her saying that when she was in the car with her five-year-old daughter, driving her to school, it felt like she was a mom for the first time, after relying on other people to take her to school. Those stories are definitely highlights. To know you’re making a difference in a small way.”

“I think it’s important for people to realise you don’t have to do massive things to make a difference in people’s lives,” she adds.

Muntu Ledwana (30) from Seshego in Polokwane says getting his car adapted through Nicky’s Drive helped him become more independent. “I used to get to work tired from walking to and from the bus stops, and now I can drive my daughter to school and go out for ice cream with her with, no worries.

“To those living with disabilities, don’t give up or lose hope when it comes to being independent, there are angels like Nicky who are able to push you in to the right ‘lane’. Just keep moving and have faith,” Muntu tells us.

Donald Pitt (34) agrees. He was left paralysed after a car crash 14 years ago, and he couldn’t wait to get behind the wheel of his adapted car.

“I took it for a spin that same night. I’m so grateful every time I get into my car. Nicky’s Drive not only funded my hand controls for my independence, but also my wife, Lize,” Donald says. 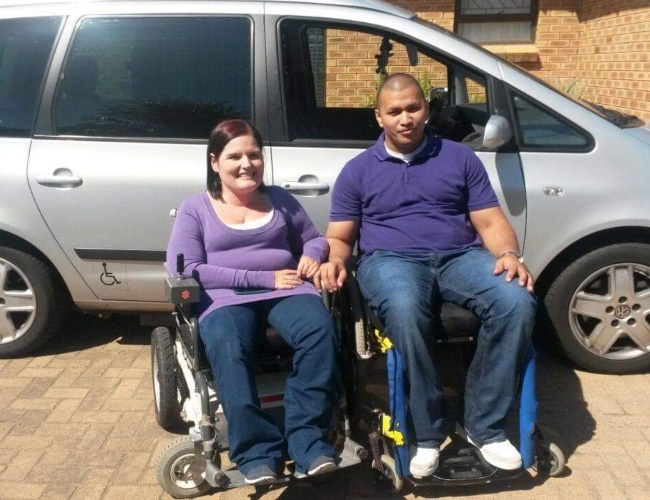 Lize only has the use of one arm and one hand.

“We dreamt of having the perfect vehicle, which we have today, and I can drive it myself. This car brought us total freedom and independence. Lize used it as her wedding car on our wedding day.”

Donald says that he can take his wife for long drives and visit their favourite spot at Sonstraal Dam in Durbanville.

“The adapted car has improved our social lives tremendously. It has given us so much freedom!”