The co-founder of Matric Live, Lesego Finger, who was nominated as LeadSA Hero for designing the app at the age of 19. (PHOTO: FACEBOOK/LESEGO FINGER)

It was meant to be a money-spinner that would earn them both a bit of extra income – but as soon as Covid-19 hit, two local entrepreneurs knew they had a duty to make their award-winning app free so all learners could use it.

And now looking back, Lesego Finger (22) and Kagisho Masae (33) have no regrets about their decision. Since they made their Matric Live app freely available, the number of learners using it has skyrocketed from 10 000 to almost 600 000.

Lesego, who was nominated as LeadSA Hero for designing the app at the age of 19, explains it supports 16 subjects, including maths, life sciences and business studies.

“It’s a learning platform where we not only make learning contextual but also make it visual. The app is for learners from Grade 10 to 12 and supports the IEB [Independent Examinations Board] and CAPS curriculum,” he tells us.

Lesego says the app will provide learners with all the information they need in the available subjects as well as past papers.

“For example, a subject such as life science, you will find that the app will provide you will all the topics that you are doing. It is just like a textbook but in a more structured and more visually appealing way. So, let’s say you click on a topic such as genetics, it will explain to you what it is,” he says.

When they launched the app in 2017, they were initially charging a subscription fee of R10 a month with the option of a lump-sum payment of R100 a year. But when Covid-19 hit and the country went into lockdown with schools closing, they made the generous decision to scrap the subscription fee so their app could be freely available to the students who needed it most.

Kagisho, who hails from Itsoseng, a township between Lichtenburg and Mahikeng in North West, says they knew the lockdown would have a direct impact on household income with learners from rural and township schools feeling the pinch the most. The other half of Matric Live, Kagisho Masae. (PHOTO: SUPPLIED)

“Lesego is a township lad and I am also a township lad and the one thing we knew immediately when Covid-19 hit was the fact that private schools will still have engaging content to study but in the township that is not the case,” he says. “It just made sense as our duty to the country to say, ‘Actually let’s forgo this [fee]’. Because how else are they going to learn? At the end of the day we care about education.”

For Lesego, who lives in Soweto, it was a costly decision as at the time the app and the subscriptions it generated were his sole form of income.

He admits that he was initially not in favour of making the app free. But he’s thankful Kagisho stuck to his guns and talked him around. Within a month of scrapping the subscription fee, user numbers jumped from 10 000 to 120 000 and now there are around 590 000 learners who make use of the platform.

To support himself, Lesego did a junior software engineer internship at a travel company and around the same time another web application he designed for the education department to assist learners with improving their marks provided the revenue needed to keep Matric Live ticking over.

And then as user numbers on the app started to grow, investors came on board to provide seed funding, which allowed them to take it to even greater heights.

This investment also helped ensure that they were able to keep the app free for all learners who wanted to use it. “This is our way of giving back to the nation,” says Kagisho who works in investment banking and lives in Sandton, Johannesburg. The local coding gurus, Lesego and Kagisho, decided to make the app freely available so all learners could use it. (PHOTO: SUPPLIED)

Lesego, who is a self-taught coder, has always enjoyed building things. While at school he developed gaming apps. After he matriculated in 2016, he studied software development at IIE Rosebank College but dropped out in the first year. He is in the process of completing a computer science certificate at WeThinkCode.

But since leaving school, Matric Live has always been his main focus. After coming up with the idea, he started plugging away at it in 2017, focusing on subjects he was good at, and the app grew from there.

“Because of my skills I had built up throughout the years, I thought about building my own app where I can provide all the resources I didn’t have when I did matric. Then I started writing the first lines of code. I then promoted it by going to one school after the other,” he says.

Kagisho shares Lesego’s interest in building apps. In 2017 he was working on something called CynC, an app which aims to connect “likeminded nerds”, as he puts it. It’s a social forum that allows techies in townships to share their common interests and challenges – and hopefully get support and input from others who’ve been in similar situations.

He initially studied law at the University of Johannesburg but dropped out in his final year. After that he went to Milpark Business School in Joburg where he completed a course in financial planning. He then went on to do an investment foundations programme with the CFA Institute which led him to a job in investment banking.

But in his spare time Kagisho likes to tinker with apps. He became aware of Lesego’s work when a mutual contact posted a comment on their LinkedIn accounts. Kagisho decided to check out Matric Live and was blown away. 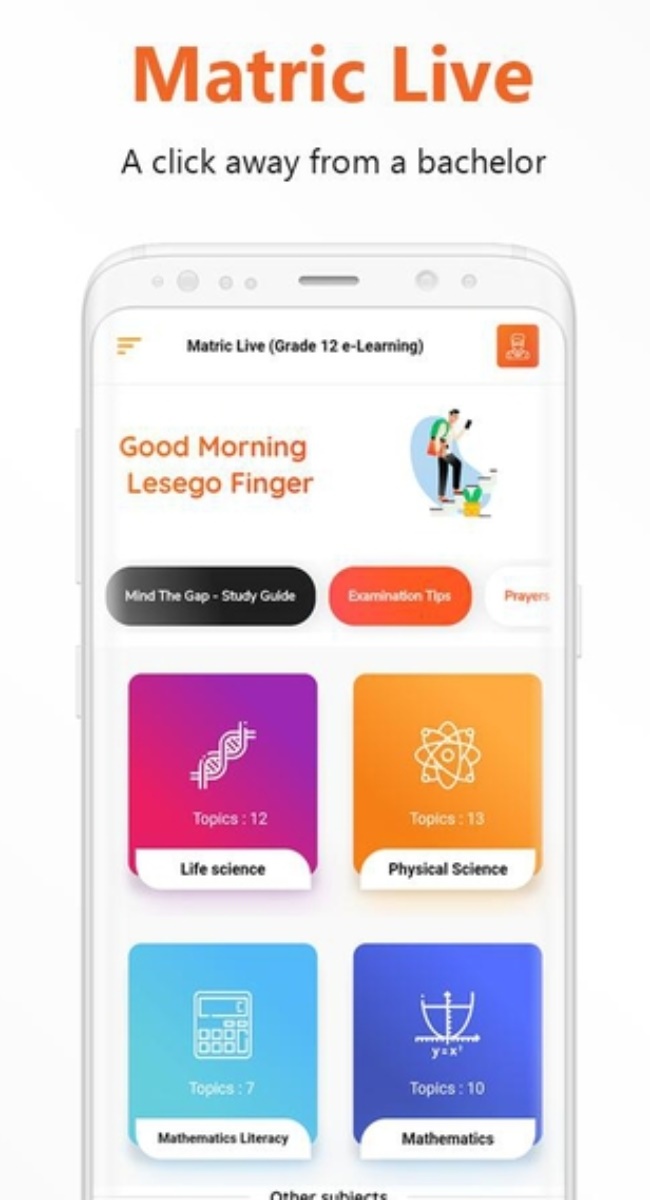 The app supports 12 subjects and is for learners from Grade 10 to 12. (PHOTO: FACEBOOK/ MATRIC LIVE)

He became aware of Lesego’s work when a mutual contact posted a comment on their LinkedIn accounts. Kagisho decided to check out Matric Live and was blown away.

“What it had was the academic content and what I had built on my end was the social component of learning, so I reached out to him and we connected instantly. A month or two later he said I think you should become my co-founder and let’s work together,” he says

Today, three years later, they have five permanent staff and four contractors working for them and their app has scooped some major awards.

They’ve turned down a number of tempting offers from big players who have been keen to buy their platform. Although it would have meant a permanent job and a large share in the profits, they decided instead to continue working with their team. The app is currently available on Google Play Store and Huawei’s AppGallery and the newer version they are working on will soon be available on the Apple App store. (PHOTO: FACEBOOK/MATRIC LIVE)

“The minute they showcased the nominees, that for me was already a big accomplishment because we were nominated among giants. When we won, it was very exciting,” Lesego says.

Kagisho says it was good seeing his friend getting the recognition he deserves.

He sees it as validation for all Lesego’s hard work and all he managed to achieve from a technical perspective without a formal education.

“It sets such a great example for other kids out there. Every award is validation for the unconventional way of learning,” he says.

“There are moments where you feel like giving up, but the feedback keeps us going,” Kagisho adds. “One of the reviews that stuck to me is from a learner from the Eastern Cape. She told me, ‘You saved my academic year because it brought back motivation to study.’ I won’t lie, I cried because I realised that what we do has an impact on students.”

The app is currently available on Google Play Store and Huawei’s AppGallery. Lesego says the newer version they are working on will soon be available on the Apple App store.