Making a splash! Bloemfontein brothers dig their own swimming pool 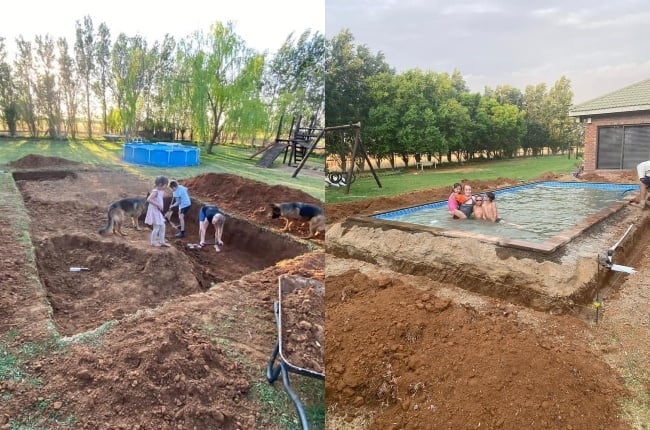 Philip and Janco Weldhagen – with a little help from little sister Anje – get to work building their swimming pool. (Photo: Facebook/Geen Pretensie)

Philip and Janco Weldhagen had big dreams of spending scorching summer afternoons diving in and out of their own pool in the back garden and begged and begged their parents to install one.

Mom Nerika and dad Jaco, however, had other ideas. Yes, the boys could have a pool – but they had to dig the hole themselves.

So Philip (11) and Janco (9) picked up spades and a wheelbarrow and got on with it.

“We wanted to teach them that hard work bears fruit,” Nerika says. “It might be easy to get someone to do the work for you, but if you put in the time and effort, it’s just so much more satisfying.”

She says it all started when her sons started nagging for a pool during lockdown.

“They’ve wanted one for a long time – the Free State heat is exhausting,” Nerika says. “I’ve always been against the idea because their sister, Anje, was still too small and we were afraid she’d fall into the pool. But when she turned five this year, the two boys started begging us again.”

Nerika and her husband started getting quotes for a fibre-glass pool but digging the hole was the boys’ job. So the brothers got to work, removing the lawn and measuring out the area.

“They had blisters on their hands from all the work but when one wanted to give up, the other would say, ‘Do you want a pool or not? Dig!’”

With a little help from a neighbour and Mom and Dad, the boys managed to complete the hole within six weeks and the pool was then installed.

“Now it’s a struggle to get them out of it,” Nerika says. “They’re in the water all the time.”

She says it’s important for them as parents to teach their kids that nothing in life is free and you have to put in the work to reach the goal.

“Our boys are in Grey College so they’re surrounded by boys from wealthy families. But we told them whatever they want in life, they have to be willing to slog for.

“They now know that if they work hard, the world is their oyster.”

Or, in this case, their pool.