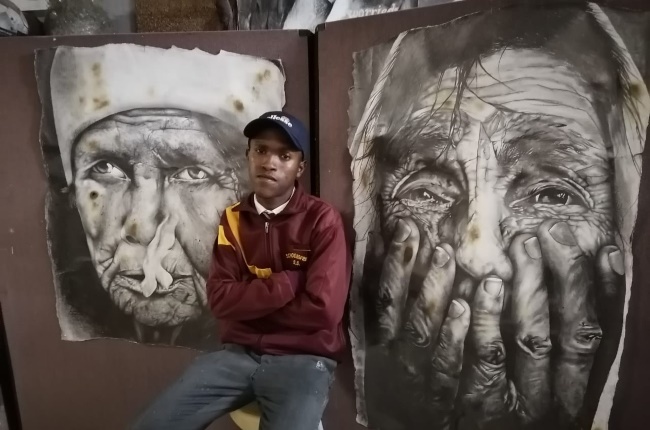 Cohnwille Swarts says his interest in drawing started at the age of 9. (PHOTO: SUPPLIED)

In one image an elderly woman cries into her hands, anguish etched into her face. Another sees a young boy, his eyes barely open, carrying his baby brother on his back. It’s hard to believe these striking images are the creations of an 18-year-old.

Artist Cohnwille Swarts, a matric student at Schoonspruit Secondary School in Malmesbury, Western Cape, became the latest internet sensation when his teacher, Celeste Arendse, posted his portraits on social media. His black-and-white art – which he creates using only a pencil and paper – quickly went viral. Now art schools across the country are lining up to offer him bursaries. “I feel very happy and good about it,” Cohnwille says. “I’m very grateful to my teacher for sharing it.

“I love art and it’s what I want to do after school – I want to study fine arts next year. My dream is to become a famous artist someday.”

The young talent hails from Abbotsdale, a small town just outside Malmesbury. He says his interest in art started when he was nine years old. “I just gravitated towards drawing and as I got older, I learnt many techniques,” Cohnwille tells YOU.

Celeste, who’s taught Cohnwille visual arts for the past two years, watched with pride as his work improved.

Each year, she hosts an art exhibition at Schoonspruit Secondary School to showcase the work art students have done as part of the school syllabus.

When Cohnwille told her the theme of his submissions was poverty, she “worried it had been done so many times before”, she says. But when she saw Cohnwille’s sketches, she was so impressed she took to social media to share them. “The standard of his work really stood out for me,” she says. “I wish I could draw like that when I was in Grade 12.” One of Cohnwille's five drawings he submitted this year as part of the school's syllabus for visual arts students. (PHOTO: SUPPLIED) Celeste says she had no choice but to share Cohnwille's work when she saw the detail in his work. (PHOTO: SUPPLIED) The young artist says he draws inspiration from his environment. (PHOTO: SUPPLIED)

It took Cohnwille about six months to sketch the five pieces in the series. Each sketch is inspired by people he sees in his environment. “There’s a lot of poverty where I come from,” he says.

Celeste gave her class the project after they returned to school in June. It couldn’t have come at a better time for the young man, who lost his mother to a stroke in April. “It motivated me even more to focus and put effort into my work and studies,” Cohnwille says.

“I know my mom would be very happy and very proud because I know she wanted me to make a success of my life.”

The teen lost his dad in a car accident when he was a toddler. He now lives with his uncle and grandmother, who are both immensely proud of him.

Celeste says they are in the process of getting the young artist’s work displayed at a new studio in Malmesbury and at a festival in nearby Riebeek-Kasteel in December. He says the best part of drawing is spending hours on the finer details. (PHOTO: SUPPLIED)

He’s also been offered bursaries by the Stellenbosch Academy of Design and Photography and a couple of other South African universities.

We live in a world where facts and fiction get blurred
In times of uncertainty you need journalism you can trust. For 14 free days, you can have access to a world of in-depth analyses, investigative journalism, top opinions and a range of features. Journalism strengthens democracy. Invest in the future today. Thereafter you will be billed R75 per month. You can cancel anytime and if you cancel within 14 days you won't be billed.
Subscribe to News24
Next on You
This Cape Town teen is battling a rare condition called Raynaud's disease but she won't let the incurable illness get her down