Pregnant and positive: my Covid-19 experience 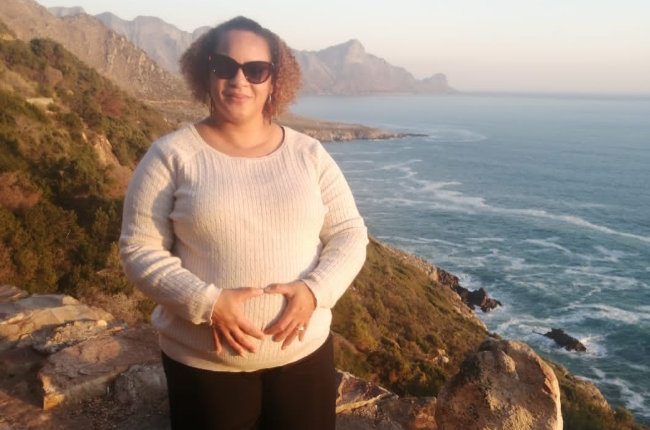 Arddyn Paarwater was delighted when she found out on 7 May that she was expecting again.

She and fiancée Orapeleng Gilbert Wewers already had three children between them – Ahnesha (20), Naveen (13) and three-year-old Caden – and they were looking forward to welcoming another little bundle of joy. Arddyn with her fiancee Gilbert and children Naveen, Caden, and Ahnesha (Photo: Supplied) So when Arddyn (38), a high school teacher from Macassar in Cape Town, started feeling unwell she put it down to early pregnancy symptoms. Her school had recently reopened so she went to work but she started feeling worse and worse.

She had a fever, an intense headache and blurred vision but she tried to justify it in other ways.

“I suffer from high blood pressure so I thought it was maybe that, combined with the pregnancy, or maybe just the seasonal flu.”

By the time she got home she was so exhausted she could barely stand – and over the next few days things escalated frighteningly.

“I lost my sense of taste and smell and developed an oddly itchy rash on the left side of my body, from my neck downwards. My headaches and fever also intensified.”

On 1 June Aardyn went for her first antenatal screening and mentioned her symptoms to the midwife.

“She told me to get tested as soon as possible,” Aardyn says. “I wasted no time and went for the test, which was very uncomfortable.”

Aardyn then immediately informed her school that she might be infected and it was closed for two days for deep cleaning. She also went into self-isolation straight away. Fortunately she and her fiancée have two houses – she lives in her late parents’ home while he has his own place. He took care of the two younger kids while she hunkered down to wait for the lab to call.

Four days later the phone rang: she was positive.

“I can’t tell you how scared I was. I was terrified about what having it meant for me, my family and my unborn child.

“At first Covid-19 was something affecting people from afar, then we heard of people in the community getting it – and now it was in our home.

“When they told me I was positive I just burst out into tears. I was pregnant and I had hypertension so I knew I was high-risk. I had so many questions – would I survive, would my baby be okay…”

Aardyn became depressed and refused to allow anyone near her, even just to check up on her and bring her food. “But my fiancée told me, ‘Aardyn, you can’t live like this and exclude people who want to help you during this time. You need people.’”

Eldest child Ahnesha stayed with her mom. “I isolated in my room and used separate utensils to her and sanitised and wiped down surfaces with bleach wherever I had been. I was extremely cautious because I didn’t want to infect her. ” Gradually, Aardyn started feeling better and has now recovered enough to return to her classroom.

“There are times when feel short of breath, like when I’ve been moving around too much at home or at school because my classroom is on the top floor.”

She told her doctor about this and he used an oximeter to check there was enough oxygen circulating through her body. She was given the all-clear.

Aardyn is now 22 weeks pregnant and her baby – a little boy – is doing well. “I had a scan on 3 August and the doctor was very impressed with the baby’s progress.”

Now she just can’t wait to meet him. Her advice to other pregnant moms who test positive is to follow doctor’s orders to the letter, rest as much as possible and allow people to help you while remaining safe.

She also prayed a lot, she says. “God helped me through this.”

We live in a world where facts and fiction get blurred
In times of uncertainty you need journalism you can trust. For 14 free days, you can have access to a world of in-depth analyses, investigative journalism, top opinions and a range of features. Journalism strengthens democracy. Invest in the future today. Thereafter you will be billed R75 per month. You can cancel anytime and if you cancel within 14 days you won't be billed.
Subscribe to News24
Related Links
Life on the frontline: Cape Town doctor opens up about working during Covid-19 storm
Can you catch Covid-19 more than once? Experts weigh in
Help your kids cope during the lockdown
Next on You
I'm the woman in the viral video and it was as bad as it looks – but I'm finally free of my abuser, Jaco Swart

Read more on:
coronavirushealthmombaby
LATEST YOU