The daughter of Martha Marais, the granny who was handcuffed to a hospital bench, is battling to come to terms with her mom’s death Sephnie Marais (left) with her late mother Martha and daughter Claudine. Stephnie says it will be a lonely Christmas without Martha. (PHOTO: SUPPLIED)

Christmas was always an extra-special time in the Marais household, especially for Martha Marais and her grandchildren.

Martha, who died at age 77 in October, became a household name after a shocking video clip was shared of the frail granny handcuffed to a bench at Mamelodi Hospital in Pretoria, weeping as she begged to be released.

Martha’s daughter, Stephnie (54), can’t hold back her tears as she talks about her happy memories of her mom – and the dark days that followed her awful experience at the hospital.

“Christmas was always so special for her. She was really looking forward to spending it with me and all her grandkids. She always used to buy presents for her grandkids and would she say how much she loves them. She’d spend the whole of December with me until January.”

The video clip sent shockwaves through Mzansi, showing the terrified grandmother on the floor handcuffed to a bench. 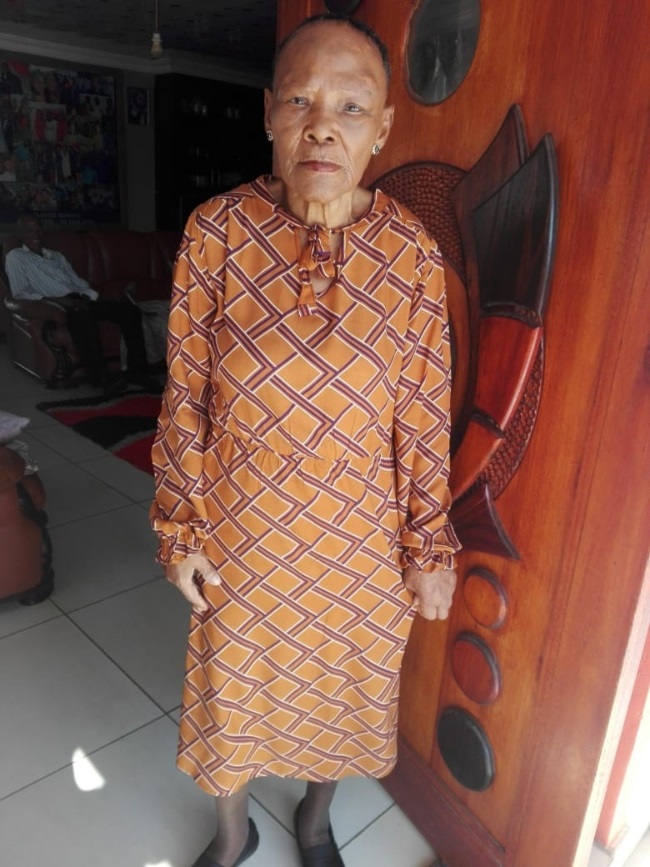 Martha Marais' health took a knock after the Mamelodi Hospital incident when she was tied to a bench. (PHOTO: SUPPLIED)

Some of Mamelodi Hospital’s staff were placed on special leave as a result of the horrifying incident in May last year.

The health department apologised and compensated her family with an undisclosed amount of money in January this year.

Former Gauteng health MEC Bandile Masuku said the department took responsibility for the incident. “I am not going to separate the department and the staff members involved, hence the apology,” he said after the settlement was reached.

The staff members who had been placed on special leave – two doctors, a nurse and a security guard – did not lose their jobs. “We are not going to be punitive because we understand the challenges that our health workers work within, but we have entered a process which we will share with the Human Rights Commission and the family on the processes that we have taken in addressing all the issues of training, rehabilitation and general management of the hospital.”

Martha passed away in October after battling dementia for a year.

Stephnie says she is still reeling from the pain of losing her mother, and the festive season has made life harder.

Her mom had been staying with her since the incident at Mamelodi Hospital in Pretoria, before spending her final days in a hospice.

“I don’t know what I’m going to do without her this year. I’m asking God to please comfort me because I really miss my mother. My mother was a special woman, she taught me so much about the values of Christmas and to love and care. I’m missing her voice and her calling me,” she says.

“She was a beautiful person. She was very straightforward, jolly and was able to make people laugh. People always wanted to be around her. For me, she was the best mom.”

Martha never recovered from the horror of being tied to a bench at Mamelodi Hospital says her daughter, adding that her mom was haunted by that traumatising experience. Martha 77th birthday is the last one she celebrated before succumbing to her battle with dementia. (PHOTO: SUPPLIED)

Her last days were filled with paranoia, terror and confusion, Stephnie says.  The elderly woman and her family received counselling after the incident. But it wasn’t enough for Martha. She insisted she could see people outside her window and was terrified that these figures were coming to take her away and tie her up as she had been at the hospital.

“She would always say, ‘There’s the guy, he’s standing there by the window; they are still looking for me’,” Stephnie says.

“I’d tell her there was nobody there. I assured her that she’s safe when she’s in my home and no one is going to harm her in any way.”

After the Mamelodi incident, the health department arranged for Martha to be examined at Steve Biko Academic Hospital where she was diagnosed with dementia.

Stephnie believes the incident triggered a decline in her mom’s physical health.

“She couldn’t walk to the bathroom by herself and she’d lose her balance and fall often,” Stephnie says.

She admitted Martha to a hospice near her home, and on 16 October, an hour after she’d visited her mom, Stephnie got a call with the devastating news.

“I had asked God to spare my mother because I lost my 30-year-old son in 2018. The beginning of 2019 I lost my grandchild, my late son’s baby. And three weeks after that I lost my nephew in a motorbike accident.” The Marais matriarch celebrates her 77th birthday with her family. (PHOTO: SUPPLIED)

Martha died on the day of her son Vernon’s 57th birthday.

Through her sadness, Stephnie hopes some good can come of Martha’s suffering.

“What my mother went through was very sad, but I pray to God that this situation can be used to better the situation of other people.”

We live in a world where facts and fiction get blurred
In times of uncertainty you need journalism you can trust. For 14 free days, you can have access to a world of in-depth analyses, investigative journalism, top opinions and a range of features. Journalism strengthens democracy. Invest in the future today. Thereafter you will be billed R75 per month. You can cancel anytime and if you cancel within 14 days you won't be billed.
Subscribe to News24
Next on You
This Cape Town teen is battling a rare condition called Raynaud's disease but she won't let the incurable illness get her down