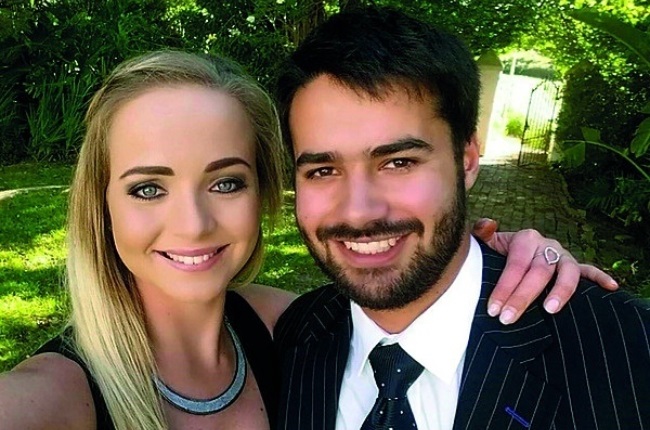 Mari Hoon and Jéan Vosloo were enjoying a long weekend at the Zuuranys guest farm in Kareedouw with a friend who found their bodies in the bathroom. (Photo: Supplied)

It’s been nearly a year since an engaged couple were found dead in the shower of the Eastern Cape guesthouse where they’d been staying and their families are no closer to learning how they died.

Mari Hoon (28) and Jéan Vosloo (25) were enjoying a long weekend at the Zuuranys guest farm in Kareedouw with a friend, Stephan du Plessis (25) who found their bodies. In one last photo, the couple were pictured relaxing at the stone house the afternoon before their deaths. (Photo: Supplied)

Now police say they’re investigating charges of culpable homicide after a toxicology report revealed that the couple had high levels of carbon monoxide in their bloodstreams.

Jéan and Mari were to have been married this month.

“I was angry and confused and shocked,” Suné Hoon, Mari’s sister, told YOU this week of the moment she heard what was in the report.

Suné told YOU last year that Mari and Jéan met when they were students living in Stellenbosch and got engaged two years later.

“I think Mari knew from the start that Jéan was the man she wanted to marry,” said Suné. “They were a perfect couple. They were like peanut butter and syrup – they did everything together.”

Mari was very excited about that weekend on the farm, she added. “She’d seen the place years ago on Facebook and had been wanting to go for some time.” The couple were to have been married this year. (Photo: Supplied)

Jéan, an agriculture graduate, and Mari, who studied entrepreneurship and business management, lived on a dairy farm in the Tsitsikamma area. He worked on the farm, while she worked in the forestry industry.

Stephan, Jéan’s friend from their university days, arranged to meet the couple on the guest farm that fateful weekend.

It was Stephan who found the couple’s bodies in the shower, after they didn’t respond when he called out to them.

The families had been waiting nearly a year for the results of the toxicology report but knowing the cause of their deaths hasn’t brought them any closure, Suné says.

READ MORE| ‘The sight still haunts me’: Randfontein pastor reunites with the family he saved from drowning 33 years ago

“We still don’t know how it happened. According to the report, the levels [of carbon monoxide] were over 70% but we’re still in the dark as to how and why this happened. Our family hasn’t been able to come to terms with it.

Apart from tell-tale signs of carbon monoxide poisoning – such as Mari’s “cherry red” face – they had no other external injuries.

It was suspected that the poisoning was the result of a gas leak – the shower had a gas geyser – but the autopsy report couldn’t confirm a cause of death until the toxicology report was completed.

Mari’s dad, Sakkie, who worked in construction all his adult life, told YOU last year that he suspected the hot-water geyser may have sprung a leak, causing carbon monoxide poisoning.

“But there are still just too many questions,” Suné says. A special painting of Mari was done shortly before her funeral. (Photo: Supplied)

Police spokesman sergeant Majola Nkohli confirmed that the wrongful death investigation has now been converted into a criminal case. “Two counts of culpable homicide are now being investigated. No one has been charged or arrested,” he said.

We live in a world where facts and fiction get blurred
In times of uncertainty you need journalism you can trust. For 14 free days, you can have access to a world of in-depth analyses, investigative journalism, top opinions and a range of features. Journalism strengthens democracy. Invest in the future today. Thereafter you will be billed R75 per month. You can cancel anytime and if you cancel within 14 days you won't be billed.
Subscribe to News24
Related Links
Local teens recall their dramatic sea rescue: ‘We’re not heroes – helping others should be second...
The details, the drama and the devastation of the cow who mauled an Eastern Cape woman plus...
‘There is light for us again’: Pretoria couple welcome baby girl after tragically losing both...
Next on You
I'm the woman in the viral video and it was as bad as it looks – but I'm finally free of my abuser, Jaco Swart