Multiple surveys show that reusable bags often do much more damage to the environment than regular bags. So why are many supermarkets phasing out traditional bags?

Reducing single-use plastic consumption is something many people strive for. But it turns out the reusable bags also come with environmental costs, as many reports have shown.

And ultimately, it depends on how you're using your bags and whether you recycle that determines the environmental impact.

Here’s a rundown of the various alternatives as well as why they’re not nearly as green as many people think. 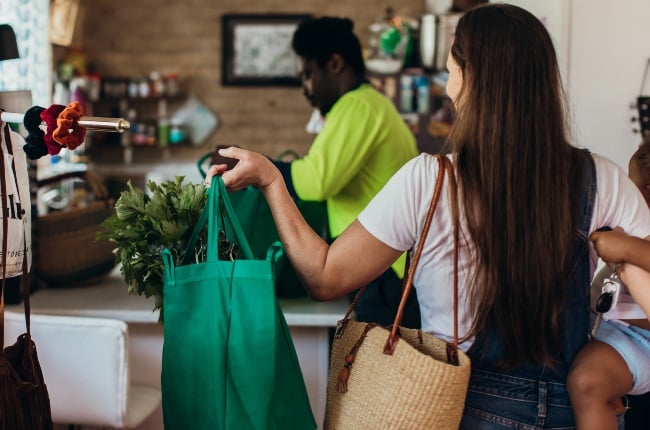 Woman making use of her reusable shopping bag while checking out at a store. (PHOTO: GALLO IMAGES/GETTY IMAGES)
Getty Images

Although these bags are made from oil and gas, they also require relatively little resources to make, meaning their impact on the environment is less than most reusable bags.

In a 2018 life-cycle assessment, Denmark’s ministry of environment and food agreed with previous similar studies, finding that classic plastic shopping bags have the least environmental impact.

But that's provided that these bags are disposed of correctly. In reality, only less than five percent are recycled, and many become litter simply because they easily blow away with a gentle breeze.

Many supermarkets have replaced single-use plastic bags with reusable thicker plastic bags (usually polyethylene), often at an extra cost to the customer. These bags are made either partly or wholly of brand new, virgin plastic although they may contain some recycled material.

But the extra plastic means making them requires more resources, so according to a Californian study you need to reuse them at least eight times to match the environmental impact of single-use bags.

And, as with the single-use bags, they still present a major litter problem so it's still important to recycle them if possible.

These are the cloth-like totes that can be bought at supermarket checkouts or are often given away as promotional items. Although they appear to be made of fabric, they’re actually made of plastic, polypropylene.

They are much thicker than single-use plastic bags, and consequently need to be used many more times to be beneficial to the environment, 104 times to be specific, although most won’t really last that long.

And given that meat and dairy products can leak – which can lead to the spread of foodborne diseases - some experts have suggested that these bags should be washed once a week, which requires a lot of water.

Since it's made of natural fibres, most of us would assume that cotton is eco-friendly. But pretty much all research comparing reusable shopping bags agree that cotton totes have the worst impact.

Cotton takes a lot of water to grow, fertilizing it leads to river and ocean pollution, and it is energy-intensive to convert the raw fibres to textile. Studies have found that a cotton bag must be reused 20 000 times to match the environmental impact of a single plastic bag. These bags, which are essentially woven plastic, make for a durable reusable shopping tote which is easily folded or squeezed so you can always keep it with you.

Research has found that the polyester bag only needed two reuses to offset the greenhouses gases emitted in making a single use bag. It's still plastic, though, and those little fibres might be polluting the ocean with every wash.

These bags are manufactured using plastic-like materials made from raw, biodegradable sources. But they're not a great alternative to single-use plastic bags, because it can take 42 reuses to have the same impact as a traditional plastic bag, research finds.

And if they're not actually getting composted at an industrial-scale facility, they can pollute the environment as litter, too.

What’s more, an experiment done by Richard Thompson, a British marine biologist who devoted his career to studying plastic waste, showed that many of these bags don’t disintegrate the way they’re supposed to. In 2015, he and his graduate students at Plymouth University buried a collection of bags labelled as biodegradable in the school’s garden. Three years later, when the bags were dug up, they not only had remained intact, they still could carry more than two kilograms of groceries.

A study has shown that paper bags use three times the non-renewable energy, up to 17 times as much water, and release twice as many greenhouse gas emissions than plastic bags do.

And, since they’re typically not reused many times, it’s hard to lower that impact. So although paper shopping bags are easier to recycle and help to lower the pollution problems associated with plastic, they aren’t as good an alternative as many people think.

We live in a world where facts and fiction get blurred
In times of uncertainty you need journalism you can trust. For 14 free days, you can have access to a world of in-depth analyses, investigative journalism, top opinions and a range of features. Journalism strengthens democracy. Invest in the future today. Thereafter you will be billed R75 per month. You can cancel anytime and if you cancel within 14 days you won't be billed.
Subscribe to News24
Related Links
Scientist innovatively recycles plastic bottle into prosthetic leg: ‘This idea has legs!’
Turtle found dead after eating plastic
Artist turns tin cans into geometric masterpieces – using just his fingers!
Next on You
This Benoni woman is a royal superfan and her impressive collection of royal memorabilia proves it