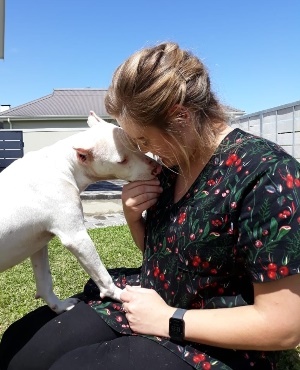 Suné has just adopted one-year-old pit bull Cooper. In the pictures of their first meeting, it looks as if Cooper is smiling with relief at finally having a happy home.

“He feels like a dog again and is getting lots of love,” Suné tells YOU.

The first meeting took place last week in Hermanus, where Suné works as a radiographer at Mediclinic Hermanus.

“That morning, I heard I’d been approved to adopt him and that the animal welfare organisation would inspect my apartment at lunchtime. The letter I sent them really touched their hearts,” she says.

Like Cooper, she’s also been through a tough time in the past few years. She recently moved all the way from Kuruman in the Northern Cape for a fresh start.

Staff from the Animal Welfare Society of South Africa, based in Philippi near Cape Town, had to work fast to save Cooper’s life. Both his ears had been cropped using scissors and the wound roughly sewn shut with fishing line, Allan Perrins from the organisation says. It had apparently been done in an attempt to make him look more like a fighting dog.

“What was left of his ears had become infected and he was clearly traumatised by these people’s cruel deeds,” Perrins adds. Cooper was in the society’s care for a month before he was adopted.

“When I first set eyes on him, it felt as if my heart would burst,” Suné says. He’s the eighth dog she’s had since she was a child.

A friend told her about Cooper and that she should read his story. The moment she read it and saw his picture there was a connection, Suné tells YOU. “I knew instantly I could give him a better life.

The three people responsible for Cooper’s deformed ears are facing charges of animal abuse. A family member of two of the suspects alerted the society to the abuse. And the two of them turned on the person who did the actual cutting, Perrins says.

If found guilty, they could be sent to jail or made to pay a huge fine, he adds. “We’ve also requested that the magistrate declare them unfit to own animals.”

The accused haven’t made a court appearance yet.

In the meantime, Suné takes Cooper for regular walks in the streets of Sandbaai and on the beach to slowly socialise him with people and other animals. He’ll soon be attending doggie school too to improve the communication between him and his new owner.

“He’s so loving and is constantly seeking attention,” Suné says. “He’s my shadow and he wants to greet everyone. You just can’t believe he’s had to survive such brutality at the hands of humans.”

Read more on:
pitbulldogear
LATEST YOU