Despite his wonky nose, Jude is a perfectly healthy pooch. Yet he’s spent a vast amount of time at a rescue facility because he was constantly overlooked for adoption due to his appearance.

Jennifer Moore (34), a waitress, and her fiancé, Joseph Carver (36), a bartender, first started fostering him in August 2019 before Hurricane Dorian hit. The couple, from Florida in the US, quickly fell in love with the quirky mutt and decided that they were the perfect pair to take care of him.

“We’ve no idea why Jude looks the way he does, but his nose doesn’t seem to affect him negatively at all – he’s perfectly healthy,” Jennifer says.

“We received a tip-off last year as Hurricane Dorian approached, that a large rescue centre was needing fosters for their dogs. My fiancé was working nearby so he picked up Jude that day and pretty soon we figured it was meant to be.

“The hurricane passed but we just couldn’t send him back – he’d felt freedom and experienced sleeping in a bed. So, we decided to adopt.”

Though Jude’s bark and features appear to be of the hound variety, his new owners aren’t 100% percent sure what’s in the mix.

Despite his questionably ancestry, the pooch has become a local celebrity because of his unique look.

“Every time we’re out and about, people point out his crooked nose. It’s a running joke with all of our friends that he always looks so confused.

“He was definitely overlooked because of his nose, which is weird because we think it’s the most adorable thing about his look.

“I was told that Big Dog Ranch Rescue, where we got him, took him all over the country to try and get adopted. But no one was interested, and he stayed at Big Dog for over two years till we came along,” she says. Jennifer and Joseph are encouraging other people to adopt a furry friend. “Our other two dogs are rescues too – Lyric, who’s three, is a Catahoula Leopard Dog and Banjo, who’s four, is a Jack Russel who was dumped in a parking lot,” Jennifer says.

“Adopting a dog is so important because it means saving their life.

“If we all bought designer dogs and helped the puppy mills to thrive, all of the abandoned, irresponsibly or accidentally bred, abused or just maybe even lost dogs would be left homeless. 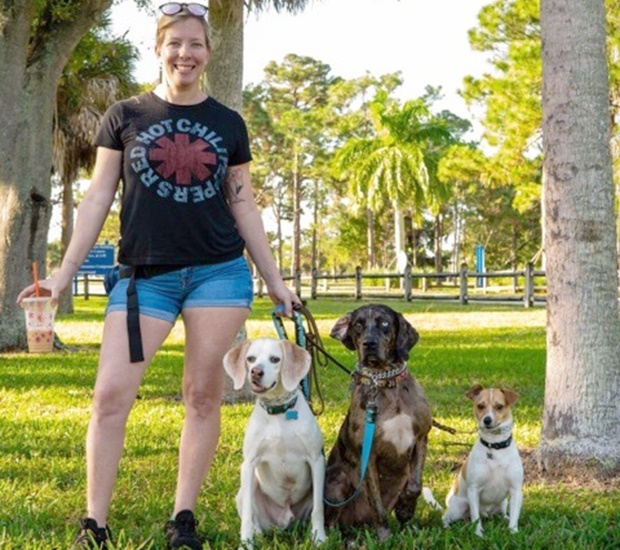 “It isn’t their fault; they deserve a good life too. The more people adopt, the fewer people will be able to breed for profit due to lack of demand.”

Read more on:
dogadoption
LATEST YOU