Boy (3) rescued by dad after plunging down manhole Boy (3) plunged into a manhole after walking on a cracked metal cover (Photo: ASIA WIRE/MAGAZINEFEATURES.CO.ZA)

A horrific video of a three-year-old has gone viral after he accidentally fell into a manhole.

The CCTV video from the city of Zunyi in China’s south-western Guizhou Province shows the boy being rescued by his dad on 1 August.

In the dramatic footage, the family of three, whose names are not known, can be seen walking on a pavement to avoid a manhole.

The boy’s mom and dad go around the manhole, which has a cracked metal cover, but the little one stops next to the sewer entrance before deciding to jump right on it.

The youngster breaks the cover and immediately falls into the manhole, leaving his parents panic-stricken as they peer down into the ground looking for him.

His father tries to climb in but is apparently unable to fit his body into the huge whole.

He then turns around and lies flat on the ground before reaching his arm into the sewers.

A second later, the tot re-emerges in his dad’s arm and his relieved mom collapses and starts crying.

The boy, who was soaking wet, didn’t suffer any injuries, according to reports. 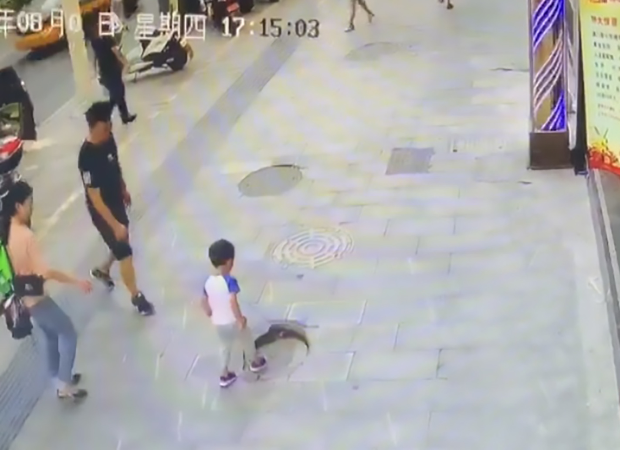 A nearby clothing shop owner, who watched the incident unfold outside her business, later offered the boy a change of clothes.

Local authorities are still looking into the case, but reports said that the local government had already sent workers to install a new manhole cover.