Coffin with corpse falls out of hearse in middle of road 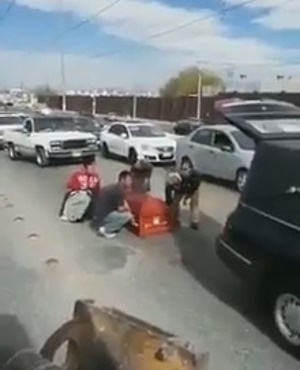 The coffin fell out of the boot of a hearse. (Photo: MAGAZINEFEATURES/CEN)

A corpse fell out of the boot of a hearse and blocked the road.

The incident took place in the city of Saltillo in Mexico after a coffin containing a corpse fell out of a hearse. It’s reported the coffin wasn’t secured properly.

In a video captured of the incident the driver of the hearse, who hasn’t been named, can be seen reversing the vehicle.

Suddenly the boot opens up and the coffin can be seen falling onto the tarmac of the road. Other drivers then come rushing over to help lift the coffin out of the road.

They then place the coffin back into the hearse along with the wreaths. It’s unknown if the driver has been sanctioned for his mistake.

The coffin didn’t break in the incident, local media reports. It’s unclear if the incident took place during a funeral.

Read more on:
corpse
LATEST YOU