Sarah (46), from London, wed partner Chuks Obanya (53) just five days after doctors told her she had terminal ovarian cancer last month, despite previously being earlier given the all-clear.

The mom of one was first diagnosed with ovarian cancer in April last year after suffering from a bad back which she put down to menopause symptoms, but after a hysterectomy in October was given the all-clear.

However, in January the couple were devastated when doctors revealed the cancer had returned and had spread through Sarah's body including to her lungs and bowel.

And when Sarah revealed never getting hitched to Chuks was her biggest regret, friends scrambled to organise a bucket-list wedding ceremony conducted at Guy's Hospital in London.

Sarah’s childhood friend, Lizzie Cooper (44), organised the ceremony for the couple and has written a book dedicated to Sarah about their friendship, Unfiltered.

“She told me that when she was told the cancer was terminal, a porter walked past and rudely asked what her biggest regret was – and she said not getting married,” Lizzie recalled.

“That was the start of it – I put a post on Facebook and people were so kind. They were rushing to help. They were so generous. They were donating dresses, cakes and volunteering to do makeup.”

"The legalities were the tricky part. We had loads of people wanting to do the service but we needed to find somewhere licensed, so we ended up doing it in the hospital.” 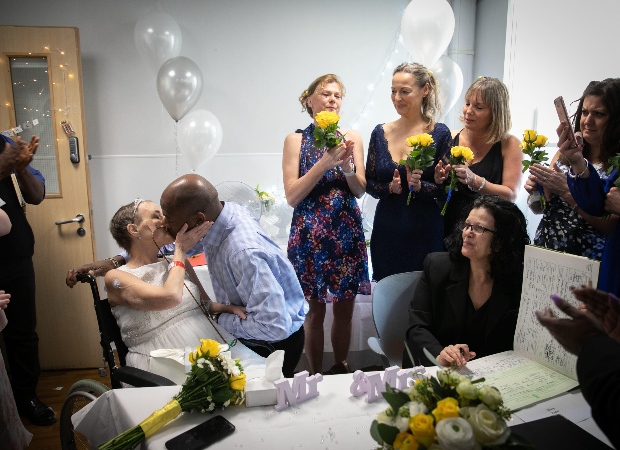 Chuks described the day he wed Sarah as the second-best day of his life, the first being the day he met her which was at a pub.

“The hospital were fantastic throughout the whole thing. There was nothing they couldn’t do for us. Sarah loved it.”

"It was such an emotional day. It was beautiful, absolutely perfect,” Lizzie added.

Sarah passed away at home on 6 February and now Lizzie has started a fundraising page to help the family with funeral costs.

“She was wonderful, a lady, sincere, her moral compass was firm.She was beautiful and there wasn’t a bad bone in her body,” Chuks said of his late wife.