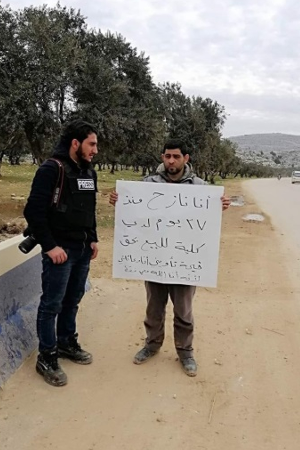 An image of the desperate man was captured and shared online, where it has since gone viral (Photo: ASIA WIRE/MAGAZINEFEATURES.CO.ZA).

A parent’s love knows no boundaries – as one Syrian dad has shown.

The parent, whose name is unknown, offered a kidney in exchange for a roof over his family.

An image of the desperate man was captured and shared online, where it has since gone viral.

“I was displaced 27 days ago,” the sign held in his hands reads.

“I have a kidney for sale, for the price of a tent which will shelter me and my family. Only God is with me.”

The family, who are refugees, were reportedly displaced following a battle with rebels.

Good Samaritans came across the man’s plea and he was provided with a tent.

The news comes amid an ongoing assault by the regime of Bashar Al-Assad, backed by the Russian military. Over a million people are said to have fled the regime offensive after it intensified in December.

Hundreds of civilians have been killed in the offensive, as bombings empty towns and villages. Airstrikes have also reportedly targeted hospitals and homes.