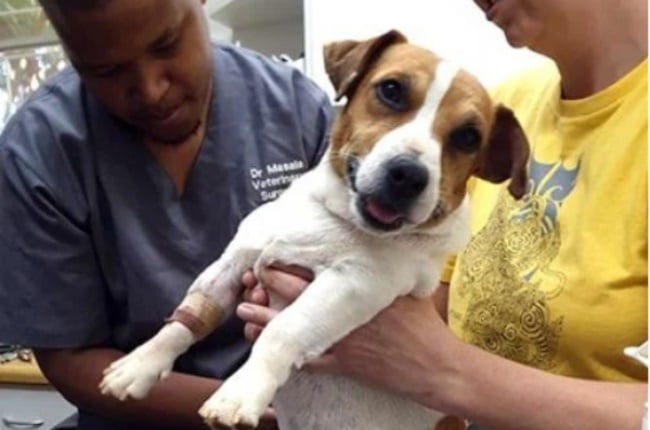 A Jack Russell from Louis Trichardt in Limpopo nearly died after a couple of 18-year-old boys fed him alcohol. The two teens have been charged with animal abuse.

Alicia Thomas of the local Society for the Prevention of Cruelty to Animals (SPCA) said the two youngsters fed Nugget the Jack Russell shooters on 3 March.

“One of them, not the dog’s owner, called a friend and said he thought they’d fed Nugget too much alcohol and he was scared the dog would die,” Thomas told YOU.

“The friend contacted us. It was about 11pm and we sent the numbers of several local vets because there was a chance the animal could suffer convulsions. But they didn’t do anything,” she added.

The next day, the SPCA followed up on the case and discovered Nugget still hadn’t been taken to a vet.

“It’s the state veterinary services – it wouldn’t have cost them a cent. Eventually, we went ourselves. The neighbours said they weren’t home, that they’d gone to town. Nugget was lying in his kennel so we took him with us. The vet told us if we’d brought Nugget there an hour later, the dog would’ve died,” Thomas said.

“I don’t know how they managed to get that much into him. You could see he was drunk but we were more worried about brain damage and that his organs would fail,” Thomas said. Since treatment, Nugget seems to have made a good recovery.

“He has no neurological damage but it’s too soon to tell if his liver is okay,” Thomas said.

“It’s terribly upsetting. Nobody – not the dog’s owner nor the owner’s parents – even called us once to ask how Nugget was doing or if they could have him back. So Nugget has been rehomed and he’s very happy.”

A court date has yet to be set. “But we’re determined [to prosecute]. Alcohol is toxic for dogs and these people should’ve known Nugget could’ve suffered terribly. We’re grateful someone informed us of the incident.”