Elderly woman locked in house without food for two weeks 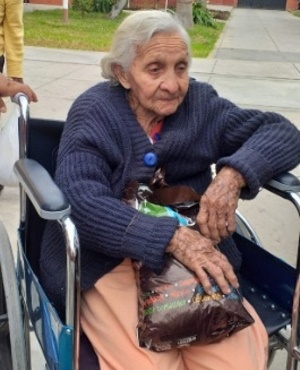 A 91-year-old woman was rescued by police after reportedly being locked and abandoned in her home for nearly two weeks with barely any food.

Luisa Victoria Sanchez Gemio, from Lima in Peru had been receiving food from neighbours through her window for 10 days.

“I haven’t eaten much. I saved some rice from yesterday and I ate it this morning,” Luisa told local reporters who arrived on the scene as she was about to be rescued.

Footage shows the elderly woman being helped by police reassuring her that they’re there to help her.

According to police commander Manuel Alvarado, this wasn’t the first time the woman had been left alone for a long period of time.

“It’s the second time she’s been abandoned by her relatives,” he says.

“There’s a police report from 18 October 2018 where a complaint was filed against 61-year-old Max Orlando Chupa Sanchez for psychological abuse. We’re still trying to find him.”

Luisa is now being cared for in a nursing home in a nearby district.

Read more on:
elderly
LATEST YOU