Now that’s a gender reveal you don’t see every day.

Narika Singh wanted to give her mom the best Mother’s Day gift while still abiding by the lockdown restrictions.

And what better way to do it than with a heart-warming driveby gender reveal of her soon-to-be grandchild on Mother’s Day.

The 36-year-old teacher from Howick West in Kwa Zulu Natal hadn’t seen her mother, Meera Singh (63), who lives in Pietermaritzburg, since the country went into lockdown.

Narika and her family have been going through a tough time, following the sudden death of her father, Narend Singh, at the age of 65 while participating in the Mandela Marathon in August 2019.

“My father and I were really close and he adored children,” she said speaking about her late father who was a principal and inspired her love for teaching.

“It was really sad for all of us in the family that he never got to experience the birth of his first grandchild,” she added.

When Narika found out she and her husband, Shawn Mangal (39), were expecting their first child together, she was incredibly excited but never did she imagine a national lockdown would prevent her from sharing the life-changing experience with her mother.

“I wish I could share these emotional stages of my life with my mother. From her scrumptious food to her love and support – I missed her so much,” she said.

This was when the couple decided to spring into action and organise the driveby gender reveal as a Mother’s Day gift for Meera who’s diabetic and asthmatic.

“We wanted to organise something special for her without putting her life at risk,” Narika explained.

Shawn who’s a car fanatic decided to use one of his vehicles for the grand reveal and although the couple struggled in the beginning with suppliers due to the lockdown restrictions, in the end it was a success.

On Mother’s Day, Narika told her mother to be ready outside with her late father’s framed photograph in hand in preparation for the driveby.

“All I asked was that she hands me one of my dad’s frames so he could witness the grand reveal,” she recalled. 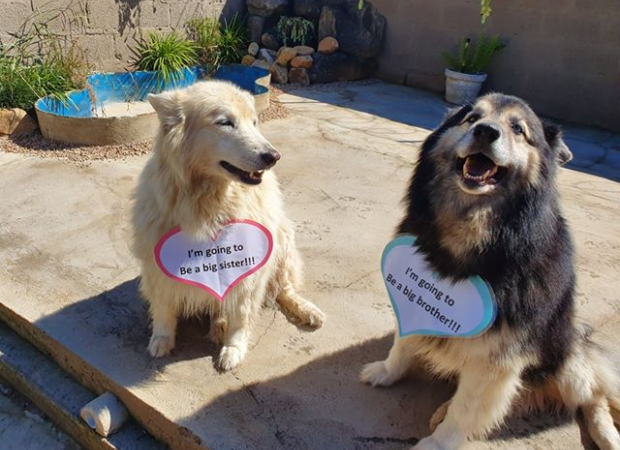 “When my mom made her way through you could see that the tears welled up in her eyes as she handed me my father’s frame. She sat across the street on a chair her and it was such an emotional moment for all of us.”

Using their bakkie, the couple loaded their boot with blue balloons that popped up when they opened it, a placard that read “It’s a boy” and blue supra coloured smoke. An emotional Meera watched this from across the street.

“I couldn’t hug her or comfort her . . . and even though I could tell she was excited for her grandson, she also expressed that she was sorry she couldn’t hug us,” Narika said revealing she tried to stop herself from tearing up from her mother’s heart-breaking words.

Although the driveby reveal wasn’t longer than 10 minutes, Narika says it was worth it, especially because she got to see her mother after a really long time.

“Without the help of our close family and friends we might not have been able to pull the entire reveal off, which is something I’m really appreciative of. But most importantly I’d like to thank my amazing husband for always being my rock with the passing of my dad. . . my pillar of strength.”

“We’ve both yearned to have children all our lives and being together has been amazing and I’m looking forward to this journey. He’s going to be an amazing father, I can tell you that.

Check out the full tear-jerking grand reveal below.