Frasier is back and we’re gonna binge watch like it’s 1999! 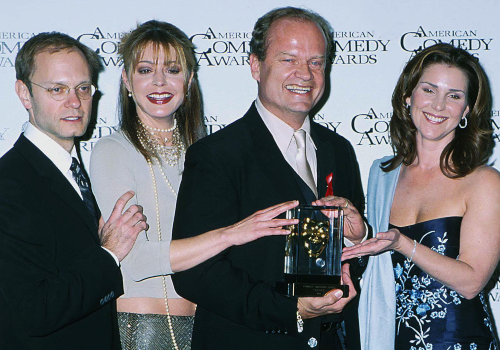 The cast of Frasier, from right, David Hyde Pierce, Jane Goodman, Kelsey Grammer and Peri Gilpin, are set to return for a new season of the beloved show.
Gallo Images/Alamy/Getty Images

If you can hear the blues a-callin', tossed salad and scrambled eggs – it can only mean one thing: yes, Frasier is coming back!The loveable, neurotic psychiatrist, played by Kelsey Grammer, is set to join the many, many reboots of beloved ’80s and ’90s series and movies. Frasier ended in 2004 after 11 seasons and a then-record 37 Emmy awards (it was overtaken by Game of Thrones’ 59 Emmys).

The new Frasier series is likely to feature the surviving cast of the show and, like Will & Grace and Mad About You, it will continue the characters’ stories.

Star and producer Kelsey says the new series “will be the third act of Frasier [after Cheers and Frasier]”. The series ended with Frasier leaving Seattle and heading to Chicago, where he was hoping to make a new life with matchmaker Charlotte (Laura Linney). Kelsey has hinted that Frasier could still be living in Chicago but has been cagey about his character’s relationship status.He also wouldn’t say what line of work he would be in, but he’s definitely “past the radio show. He might be an art dealer. He might be a professor. We don’t know yet”.

Read this for free
Get 14 days free to read all our investigative and in-depth journalism. Thereafter you will be billed R75 per month. You can cancel anytime and if you cancel within 14 days you won't be billed.
Subscribe
Already a subscriber? Sign in
Next on You
Family and friends remember journalist Dom Phillips and activist Bruno Pereira who were murdered for trying to save the Amazon rainforest

Read more on:
reboottv
LATEST YOU