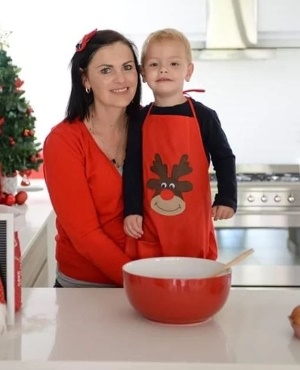 The past two years were hard for Esthea Moll (31) from Bethlehem in the Free State. But after her son’s heart surgery proved successful, she’s looking forward to a joyous Christmas – though she still misses her husband.

In circumstances in which many people would’ve given up hope, this teacher is keeping her chin up despite being hit by several tragedies during the past two years.

First, she and a group of colleagues were involved in a collision with a truck outside Bethlehem. The accident claimed the life of a colleague, Coreen Monk (30).

Then barely six months later her husband, Harald (32), died of a heart attack while attending a Mighty Men conference near Fouriesburg. Their little boy was only 11 months old at the time.

A year after Harald’s death she was told her son, Wian (now 2), needed heart surgery.

The surgery was performed on 28 November and Esthea says it was a success.

“I was quite nervous before the surgery because Harald had died of a heart problem. But the surgery was a huge success. Now Wian can recover and grow into a normal, healthy little boy.”

She says they’ll be spending Christmas in Bethlehem with friends and family.

“We’re going on a break to the mountains for a few days and we’ll spend the rest of the time with loved ones. I’m looking forward to quality time with Wian.”

And though they’ll miss Harald around the Christmas table, she says they’re going to share the fond memories of him. “The longing and memories will never cease. But it gets better with time.

“He lives on in our hearts. We’re no longer clinging to the past. We’re picking ourselves up and living life to the fullest.”

Read more on:
deathteachermom
LATEST YOU