Girl with rare condition that affects her features: 'I feel pretty' It doesn’t matter what she looks like on the outside – it’s what’s on the in- side that matters.

This is what her mom instilled in her from an early age and it’s worked miracles. It doesn’t bother the 12-year-old that her nose is misshapen, her eyes are set wide apart and that she has six toes on her right foot.

“When I look at myself in the mirror, I look pretty,” Stephanie Deysel says.

The youngster, who lives in Viljoenskroon in the Free State, was six months old when she was diagnosed with frontonasal dysplasia, a rare condition in which the head and face develop abnormally in the womb.

Stephanie has been in and out of hospital most of her life and still has several treatments lined up, but nothing seems to get her down – not even the fact she’s often picked on by the other kids at school.

“They tell me I’m not normal because I have six toes and they tease me because I write slower than everyone else,” she says. “I suppose it’s not nice to say things like this, but I just try to ignore them.”

Her condition also manifests in poor eyesight and she struggles to read what’s written on the board in the classroom.

“Luckily, I now sit in the front row in every class,” says Stephanie, who’s in Grade 7 at Salomon Senekal High School, a combined school in Viljoenskroon for kids from Grade 1 to matric. She has only one friend who’s very protective of her when the bullies close in.

“We’ve been friends for three years,” Stephanie says. “She just came up to me in class one day and said she wanted to play with me.

“I said ‘yes’ and for a week we played together every break time. Then she said she wanted to be my friend.”

Stephanie’s mom, Annette Deysel, was seven months pregnant with her when she lost her husband, Fanie Potgieter (36), to stomach cancer. It was a bitter blow.

“I didn’t have a job at the time and kept wondering how I was going to manage raising a baby on my own,” Annette (38) says.

She had no idea more challenges lay in store. Her pregnancy was uncomplicated and ultrasound scans didn’t pick up any abnormalities.

Stephanie was born at 40 weeks and weighed a healthy 3,3kg. But as soon as Annette looked at her little girl, she knew some- thing was wrong. “You could immediately see she looked different.”

Annette took her baby to their GP who started calling around and soon a seemingly endless series of visits to the Universitas Academic Hospital in Bloemfontein began.

First, Stephanie was tested for Down syndrome, then for Crouzon syndrome. All the tests came back negative. Then came the frontonasal dysplasia diagnosis that would lead to six-monthly hospital visits to monitor her development until she reached the age of five.

“In those early days I cried a lot,” Annette says. “It seemed so hopeless. All I wanted to know was whether she’d be healthy and if they could fix her face.”

When Stephanie was five, she and Annette travelled by train to Cape Town where the little girl underwent a battery of tests at Tygerberg Hospital. Two years later, they returned so Stephanie could have the first of her surgeries.

“Doctors moved each eye 1,5cm closer to her nose,” Annette explains. “She was in hospital less than a week. The surgery was done during the school holidays so she didn’t miss any classes.”

Last year, Stephanie was due to return to Cape Town for surgery to reduce the size of her nose but at that stage Annette was pregnant with her youngest child, Jamie (now six months old), and couldn’t make the long trip.

She’s now separated from Jamie’s dad and also has another daughter, Khloe (4), who’s very close to Stephanie. Annette is preparing to take Stephanie back to Cape Town for her pre-surgery consultation and is thankful to a group of Good Samaritans who’ve helped collect money for the trip by bus, this time to the Mother City.

She’s been assured the coronavirus crisis won’t interfere with the visit, Annette says.

“I’d never have been able to afford the bus tickets. I’m grateful for the help,” says the mom, who prepares takeaways at a fast-food restaurant in Viljoenskroon.

“This consultation is just an examination to determine the extent of the surgery. The doctor will give us a date for the next surgery.” 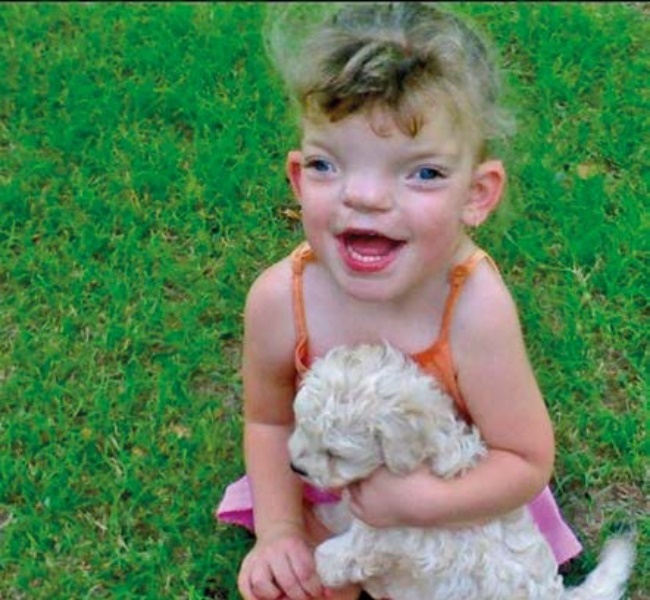 Stephanie has always known she looks different to other kids and has never questioned the need for surgery.

“Maybe it’s because I’ve been telling her from a young age that doctors were going to operate on her face. She’s an easy child when it comes to these things,” Annette says.

Stephanie loves sports and plays hockey and does athletics at school. She’d like to play netball but her lack of depth perception means she can’t estimate the distance of the ball.

She’ll soon get spectacles and Annette hopes it will improve her vision enough for her to play the sport.

“Although lenses can’t fix what’s wrong with her eyes, I believe glasses will make things a little easier for her.”

“I’m excited to get glasses,” Stephanie pipes up. When she grows up she’d like to become a teacher or a chef, she tells us.

“I like maths and technology, and I can make eggs and French toast,” she says proudly.

The most important lesson she’d like to teach other kids is that when someone bullies or teases you, you should turn around and walk away and not let them see they’ve got to you.

“It’s the best thing to do,” Stephanie says.

She’s looking forward to going to Cape Town, she adds. And maybe going to the beach too.

Frontonasal dysplasia is a rare congenital condition caused by abnormal development of the head and face before birth. Common characteristics are widely set eyes, a broad nose with no tip and often a cleft in the nose, upper lip or palate.

In some cases it can result in the absence or malformation of the tissue that connects the two halves of the brain and can cause intellectual disability, although this isn’t the case with Stephanie.

Most children live normal lives although in some instances where breathing is badly affected early death has been recorded.