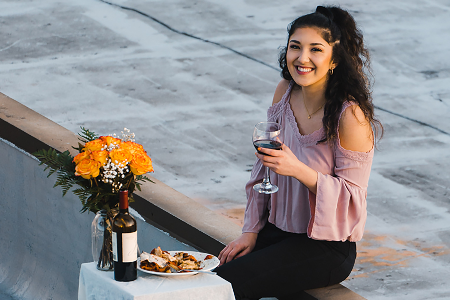 With Jeremy sitting at a table on his balcony, and Tori sitting at her own separate table across the street, the pair had their “first date” over facetime. (Photo: ASIA WIRE/MAGAZINEFEATURES.CO.ZA).

Quarantine and self-isolating didn’t stop one smitten guy from asking a woman out on a date – thanks to his trusty drone and bubble suit – which resulted in an amazing modern-day romance.

As the world is on lockdown in order to help prevent the spread of the coronavirus, quarantine and self-isolating have made people miss the little things that they took for granted, such as basic human interaction.

But for one shy photographer, Jeremy Cohen from New York, the concept of social distancing helped him to pluck up the courage to ask a woman out on a date.

After spotting Tori across the street hanging out on the rooftop of her apartment block, the 28-year-old decided to start a dialogue with just a simple wave.

From there Jeremy bravely attached his telephone number to a drone, and sent it hovering over the street to amused Tori.

An hour later, Jeremy received a text, and so a modern romance had been set in motion.

“I had butterflies in my stomach when Tori messaged back. I thought it might be too good to be true,” Jeremy said.

“We text every day and sometimes facetime. It’s strange in the sense that we feel like the world is watching us as well as being quarantined. But we vibe well and she’s really easy to talk to.”

The pair then decided to go on a date but thought it would be best for safety purposes to continue social distancing.

So with Jeremy sitting at a table on his balcony, and Tori sitting at her own separate table across the street, the pair had their “first date” over facetime.

“It’s been weird. I’m an outgoing guy, so being quarantined in my tiny space makes me crave some human interaction,” he added.

But with the help of technology, Jeremy was able to connect with Tori.

When Jeremy decided that he finally wanted to meet Tori in person, he got an inflatable human hamster ball so that the couple could go for a pleasant stroll together, while still making sure they were maintaining distance.

How to date a Quarantined Cutie, Part 3.

“It brings me joy to know that it has been some positive news to share during these strange times,” he said.