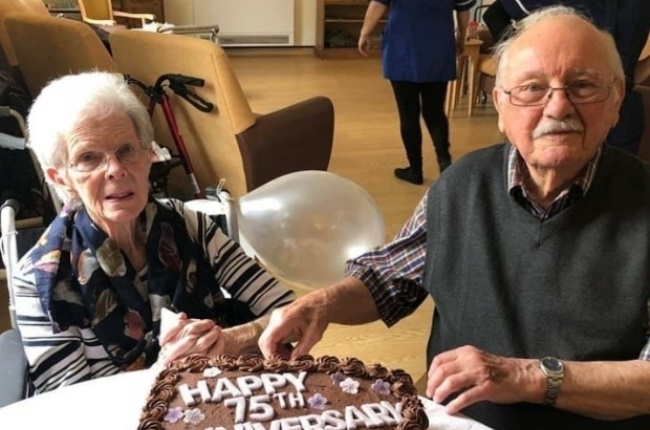 This grieving husband lost his battle to Covid-19 just days after his wife’s death from natural causes.

Dick (95) and Jean (97), who lived in a care home, had never spent a day apart since 1943 and would’ve celebrated their 77th wedding anniversary together in August, according to their daughter Nicky Guest-Walmsley.

But when Jean passed away in April, Dick was left absolutely heartbroken and had stopped eating, says Nicky (63), who’s from East Riding of Yorkshire in England.

Less that two weeks later, the bereaved grandfather of two was taken to hospital when he began struggling for breath.

The elderly man died just two days after testing positive for coronavirus on 1 May.

Now Nicky is urging people to take the newly recognised symptom – losing your sense of taste and smell – more seriously after realising her dad’s loss of appetite was a red flag that she believes could’ve saved him.

“We didn’t even know Dad was ill. He’d got a bit agitated and irritated before he passed, he wasn’t enjoying his food, he stopped eating and started complaining that the food was crap,” Nicky said.

“But we now know that was because he’d lost his sense of smell and taste.

“I think we all thought he was being a bit stubborn because he was missing Mum and his family.

“We usually go to see him daily, but we obviously couldn’t see him because we were in lockdown.

“He was absolutely heartbroken by the death of Mum.

“They hadn’t spent a day apart in 76 years – even though Mum went into the home two years before him, he still went to see her every day.

“When the paramedics came and wanted to take him to hospital, I told him, ‘You need to either go to the hospital and fight to stay alive to see your great-grandchildren or you stop fighting and go to be with Mum.’

“He said he wanted to see his great-grandchildren grow up but when they took him away that was the last time I ever saw him.”

Nicky, who lost her husband, David (70), to prostate cancer in 2013, stopped working to look after her parents six years ago, which she did full time until her dad joined the care home in February this year.

Having lost her mom in April, the mom of two insisted on visiting the care home to discuss arrangements for the funeral with her dad.

But after visiting Dick in person Nicky was concerned that there could be something more seriously wrong with his health than just grief.

Despite her concerns, a Covid-19 test Nicky conducted on her dad at the home came back negative.

But just 12 days after losing his wife, Dick’s breathing began to deteriorate and the following day he was taken to Hull Royal Infirmary in Kingston upon Hull, where it was confirmed he had the virus. He died two days later. “Mum had been dead a week and I had to ask him what he wanted me to do in terms of the funeral.

“I filled a bag with goodies that would usually tempt him but they were still there a week after I’d left them and they were completely untouched.

“I knew there was something more serious going on.

“In the early hours of Tuesday morning his breathing was really bad and he was struggling to breathe.

“The paramedics said they wanted to take him into the hospital because his oxygen levels were down to 80% and that his organs would start to fail.

“But he didn’t want to leave me.

“I don’t think he was fully conscious of what they were saying.

“I sat with him for 22 hours and he was restless so I asked the nurses at the care home if we could give him some end-of-life drugs but the only way they could do that was by calling out the paramedics again.

“By that time his oxygen levels were at 56%. I could see that he was gasping for breath.

“Within a few hours of being in hospital he’d tested positive for coronavirus and had been moved to a Covid-positive ward,” she said.

There will be a joint funeral service for Dick and June on 5 June.

“It was hard to know to what extent he was off his food because I couldn’t see him until it was too late.

“Dad had only gone into the home in February and I’m now thinking that if he hadn’t gone in maybe this would’ve never happened to him.”

Read more on:
coronavirushusbandlockdown
LATEST YOU