Jayde Panayiotou’s sister: ‘I feel guilty for just being alive’ 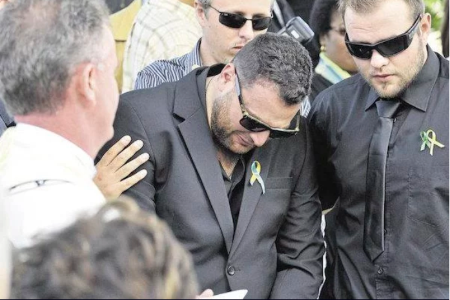 During the murder trail there were two camps in court daily. On one side, there was the family and friends of Jayde Panayiotou (28), the brunette teacher from Uitenhage in the Eastern Cape who was abducted and murdered in April 2015. This camp showed up in court with the words “Justice for Jayde” emblazoned on their T-shirts.

On the other side, there were the loved ones of Christopher Panayiotou (now 33), Jayde’s husband who’d been arrested shortly after his wife’s disappearance as he was believed to be the mastermind behind it.

He was eventually found guilty of murder in November 2017 in the high court in Port Elizabeth and sentenced to life in prison.

Now, more than two years later, most South Africans have nearly forgotten about this murder and subsequent trial, but for the family and friends of both Jayde and Christopher, who still struggle daily with the loss.

Toni Bridgett (31), Jayde’s younger sister, has put her emotional struggle into words on her blog, Jayded.

Day after day Toni was in court, supporting her parents, Derrick and Michelle Inggs.

“I don’t believe I’ve been able to mourn or grieve my sister’s death,” she writes on her site.

“Since April 2015 I put these feelings aside so I could concentrate on being strong for my family and being tough for myself, but truthfully my strength was a front.

“I believed that once the accused were sentenced, justice would bring me a sense of peace and the ability to put aside the resentment, anger and fury in order to concentrate on the most important person, Jayde.” But Toni goes on to write that though family and supporters were “joyful and ecstatic” when Christopher and one of his co-accused, Sinethemba Nemembe, were found guilty and charged, she eventually came to the conclusion, “Justice doesn’t exist.”

Apart from the kidnapping and murder, Sinethemba was also found guilty on charges of aggravated robbery. Another accused, Zolani Sebeko, got 15 years in prison for conspiracy to murder.

Jayde’s death and the trial that followed also turned the Panayiotou family’s lives upside down. Christopher has since applied for leave to appeal his sentence, but was denied.

“Yes, Jayde’s family are in pain but we’re in agony,” Christopher’s mother, Fanoula, told YOU’s sister magazine Huisgenoot after his sentencing. “It doesn’t matter if others think we didn’t love Jayde. They’re very, very wrong. We also lost a daughter. And now we’ve lost our only son.”

Fanoula and her daughters, Chloe (30) and Kalleope (27), had barely come to their senses after the trial when tragedy struck again. Christopher’s father, Costa (67), was shot and killed during a car hijacking outside his Uitenhage shop in December last year. His killers are still at large.

Before he died, Costa had maintained his son’s innocence. “Christopher has told me many times he had nothing to do with Jayde’s death – and I believe him.

“So they [Jayde’s family and supporters in court] can applaud and laugh as much as they want; I know my son,” he told Huisgenoot.

Toni writes her anger towards Christopher and the other accused overshadows her entire life.

“For the past four years and nine months every tear, every frown, every heart palpitation and every sleepless night was swarmed with anger towards the accused people in my sister’s murder. There wasn’t one single moment or memory that was entirely about Jayde. Every happy thought was turned into anger and every joyous occasion was ruined by the mere existence of the accused.”

When Jayde was kidnapped that day in April 2015 while waiting for a lift to school and her body was found a day later, everyone’s first thought was that she’d been the victim of a violent car hijacking. But then came the shocking news that Christopher, who’d been in a relationship with Jayde for 10 years, two of them as a married couple, had been arrested. Later, it also came to light he’d been having an affair with another woman since before marrying Jayde.

In court, the couple’s loved ones heard how he’d hired a hitman to end Jayde’s life and make it look like a hijacking.

Toni writes it didn’t take her long to start hating Christopher for what he’d done. “The man I once called my brother was a sick, evil, egotistical demon. As evidence was placed forward my initial shock and disbelief turned into disgust and hate. I learnt how regret can quickly eat away at you. Still, I was sure that when justice came life would get better and dealing with the regret would get easier.”

Though she doesn’t regret fighting for justice and she’s says she’s grateful to their legal team, she says Christopher’s conviction didn’t bring her the peace and closure she’d been hoping for. “I just feel stuck in the numbness of justice, with the same unanswered questions that I’ve had with me from the day my sister was brutally murdered.”

In a more recent blog entry, dated 20 January 2018 and titled My Sister, Toni pays touching tribute to Jayde with “her caring nature for children and animals”.

Jayde cared deeply for the primary school kids she taught at Riebeeck College in Uitenhage, Toni writes. “She was a mentor to them, someone they could confide in, and she took her job very seriously. She carried their hurt and sadness with her. She had such a big heart.”

Then Toni goes on to reveal, “I’ll always feel guilty for just being alive and I really do wish that it was me that was murdered instead of her. I wish my mom and dad still had her rather than me.”

She misses her sister, whom she calls her best friend, so much that she’s combed YouTube videos just to hear Jayde’s voice one more time.

Yes, Toni writes, she feels Jayde’s presence when she’s around one of her sister’s friends, and she looks for Jayde in the beauty of nature. “I feel her in the warmth of the sun and I love it when she paints the sky red in the evenings.”

But though she clings to these memories, she admits that it’s not enough. “I want more. I need more. But the selfish, sick bastard has taken her away from me forever and each day I’m reminded of the pain of losing her. Each day is a constant battle.”