Local family who overcame coronavirus share their experience: ‘Be present and take it day by day’ City to city, together as one.

Parow North couple share how they and their kids survived testing positive for Covid-19 and overcame it together.

Lloyd and Nicole Lottering and their three daughters all contracted the virus while hunkering down with Nicole’s parents in Middelburg, Eastern Cape.

“My mom contracted the virus while we were in Middelburg. We went there after the president announced lockdown the very first time in March,” says beauty therapist Nicole.

“We decided to pack up and go to Middelburg for those 21 days.

“We came back after the president announced the beauty industry opened and we could start working again.”

The week before the Lotterings and their daughters – Xyla (12), Rosanna (6) and Sura (5) – returned to Cape Town in late June, Nicole’s mother started showing symptoms as well as the rest of the family.

“My mom initially thought it was flu but then her taste just went. She couldn’t taste and smell anymore, then she contacted the doctor and he said she must come in for a test.”

The family were reluctant to leave Middelburg due to Nicole’s mom's pending test results.

“We were ooh-ing and aah-ing whether we should go back, knowing that if she was positive then we probably all are positive.

“We decided to leave anyway, on Sunday 28 June. Just before we actually got home, my dad phoned to say my mom’s results came back and she tested positive.”

The family’s eldest daughter Xyla struggled to comprehend the situation.

“My daughter went into a panic, she thought we were all going to die. Myself, my husband, my mom and my dad. She was a bit shaken up by the news.”

But for Nicole, it was a sense of relief to finally have certainty.

“Initially I tried to get my head around the fact that it’s inevitable that we’ll all get the virus eventually, but ours just came a bit quicker,” she said.

“The two little ones were just happy to be home in the space that’s familiar to them.”

Upon arrival back home in Cape Town the family all got tested and received their results on 4 July.

Although Nicole had a pre-existing condition, she was more worried about her kids.

“Rosanna has asthma and all three of my kids were born premature and had problems with their lungs in hospital,” she said.

“Those were the kind of thoughts that went through my mind and being worried about them. The underlying stuff that people talk about, I wasn’t really worried about myself, just the people around me.”

Lloyd (37), who works in the courier industry and as a photographer, was more concerned about his wife.

“My husband was extremely worried about me because of my high blood pressure and because I suffer from sleep apnea as well,” Nicole said.

“With sleep apnea you struggle to get oxygen to your brain, so that was one of his biggest worries. He was quite anxious about that.”

Due to lockdown, both Lloyd and Nicole were without an income, which placed even greater stress on the family. 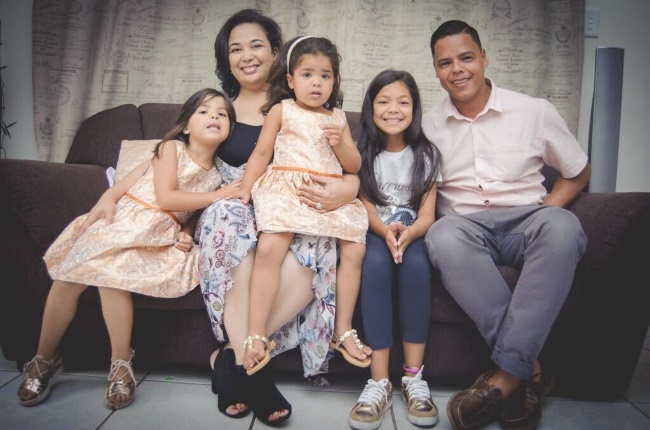 “The financial implications were one of our biggest worries, we haven’t worked for so long and we need medical care and groceries. How were we going to get through and sustain ourselves in this time,” she said.

But the family found ample support from their community, friends, family and even some of Nicole’s clients.

“When we got back to Cape Town the support we received from the community was overwhelming, especially from the NG Kerk, from people I know and family, friends and clients.

“The support was really amazing because I had to let people know that I tested positive.

“We couldn’t survive on our own or sustain ourselves, but all these people made it possible.”

Nicole urges people to not keep their Covid-19 status a secret.

“I don’t think people should keep their status a secret because you can’t help yourself,” she said.

“When you have people around you who know your status, they’re more than willing to reach out to you. And I’m more willing to do the same for the next person.

“We should at all times lend a helping hand or be there for the next person. I think it will create a better society.”

The family believe in tough times like these there are some key things to remember.

“You should be there for your parents because children don’t get so sick,” said Xyla.

She strongly urges other children to help their parents as children have comparatively milder symptoms.

“Get level-headed and control your thoughts, because those are the things that create anxiety,” Nicole advises.

“We were all quite calm when we received our test results, and it was actually a relief because my mom was positive and we were there all day every day. We kind of expected it.

“Get your mindset sorted and be aware of your thoughts, try and find peace within yourself.”

Lloyd also believes that respecting the lockdown regulations and systems put in place will serve as protection.

“Respect the regulations, wear your mask and sanitise,” he said.

“If you get Covid-19, be present and take it day by day. Shut out that voice in your head that stresses you out, and get your anxiety under control.”

We live in a world where facts and fiction get blurred
In times of uncertainty you need journalism you can trust. For 14 free days, you can have access to a world of in-depth analyses, investigative journalism, top opinions and a range of features. Journalism strengthens democracy. Invest in the future today. Thereafter you will be billed R75 per month. You can cancel anytime and if you cancel within 14 days you won't be billed.
Subscribe to News24
Next on You
This baby got the nickname Little Nugget after an emergency birth in a McDonald's bathroom