Man calmly sits next to severed arm after accident 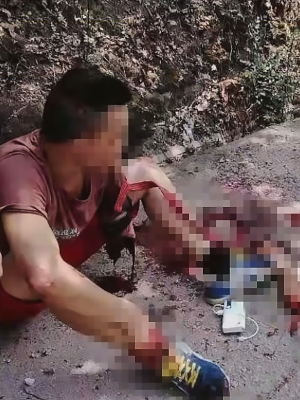 The 37-year-old man collected the severed limb and returned to the roadside to calmly sit and wait for help. (Photo: ASIA WIRE/MAGAZINEFEATURES.CO.ZA)

He was strolling home from work when his left forearm was hit by a passing vehicle.

The limb went flying and landed several meters away. But instead of hysterically panicking, the 37-year-old man collected the severed limb and returned to the roadside to calmly sit and wait for help.

Now a shocking video of the incident, which took place in central China's Hunan Province, has gone viral.

In the footage Huang Songliang is seen sitting on the asphalt with half his arm lying in a pool of blood next to him.

A statement released by Songliang's father revealed he was turned away from the local hospital due to the severity of the injury.

He was then transferred to a larger hospital where his forearm was successfully reattached.

Sadly, Songliang, who's the family’s sole breadwinner, won't regain practical use of his limb.

"He's already had surgery to reattach his left arm, but it was done for aesthetic reasons. He won't be able to use it," the statement reads.

The family have since resorted to pleading for donations to cover the hefty hospital bill they've been left with.

We live in a world where facts and fiction get blurred
In times of uncertainty you need journalism you can trust. For only R75 per month, you have access to a world of in-depth analyses, investigative journalism, top opinions and a range of features. Journalism strengthens democracy. Invest in the future today.
Subscribe to News24
Related Links
Graphic images: University student takes graduation pictures next to mom's coffin
5-year-old survives tragic fall from 12th floor
Father of six dies in freak wave accident
Next on You
22 and counting: meet the family with two soccer teams' worth of kids