Man with rare condition embraces his unique appearance through fashion 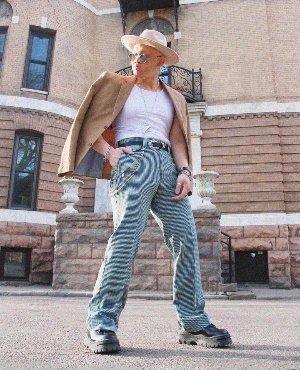 An American man with a rare condition that has left him with no teeth and the inability to sweat has finally embraced his unique appearance.

Joe Tou Voua Lee (23), a salesman from Minnesota, was born with ectodermal dysplasia, a disorder that has left him with no teeth and poorly functioning sweat glands which prevent him from sweating even in the hottest temperatures.

Although he was never bullied, the 23-year-old admits he hated his life because of his facial deformities and would insist on hiding his mouth.

“It made it really hard for me to make friends,” he said.

“I've never had a truly close friend who isn't family because of it. If anything, it made me feel lonely.

“I've always tried my best to hide the fact that I have no teeth to everyone; I hated having the conversation that I didn't have teeth.”

But when he reached his twenties, Joe discovered an unusual interest in professional wrestling.

Six months into his training, the young salesman decided wrestling wasn’t for him but admits it helped boost his confidence and changed the way he viewed himself.

He began posting pictures of himself on Instagram wearing various outfits.

“Ever since high school I always had a weird quirky style influenced by K-pop,” Joe said.

“I've always wanted to showcase that style online as well, but my self-esteem and confidence issues denied that direction. “As my style continues to evolve and change, I have gained the confidence to showcase myself, so I started posting them to Instagram.”

Joe said he hopes to inspire others with genetic disorders who might feel that their condition is holding them back from doing anything they want. “Just look at me, see my journey, and improve on yours. Nothing should hold you back from doing what you want,” he said.

“I just want people to be themselves and to be comfortable with themselves. Everything starts with you, so fix your mind set, and everything else will hopefully fall into place.”