Meet the dog that often gets mistaken for a teddy bear 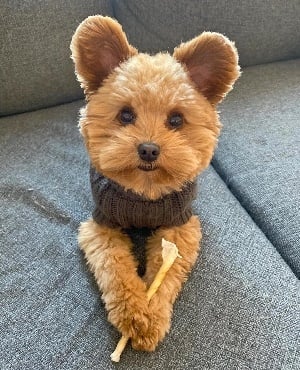 An adorable dog is frequently mistaken for a stuffed teddy bear, much to the amusement of its owners.

The tiny pooch was adopted by Steffen Finstad and Sofie Lund, both 23, in May 2019, and the pair often find people mistaking Oliver for an actual teddy bear.

Lovable Oliver is an eight-month-old Spitzpoo puppy (a mix of a German Spitz Klein and toy poodle) from Oslo in Norway and is arguably one of the cutest dogs on Instagram.

“Sofie and I were originally looking for a cavapoo [a Cavalier King Charles Spaniel and toy poodle cross], but came across Oliver and instantly fell in love,” Steffen said.

“We’d never seen a dog as cute as him before so we knew we had to get him.

“On a daily basis, people come up to him and say hello and comment on how much he looks like a teddy!

“I was once on the subway with him and a little boy asked if he could hold him, thinking he was actually a toy, not a dog.

“When we went to pick Oliver up back in May, he jumped straight into Sofie's lap.

“He was the most timid of his siblings but he definitely seemed as if he was ready for a family with Sofie and me - he enjoys the stability and security.” Steffen and Sofie decided to set up an Instagram account for Oliver when they became bored one afternoon, never guessing their four-legged friend would generate so much interest.

“Sofie and I were bored during our summer holiday so randomly decided to set up an account for him,” the proud owner said.

“As well as this, we live in a different city from our family and friends so we thought it could be a good way for them to keep up to date with how Oliver's doing. “We obviously knew Oliver was super cute, but we had no idea he’d be so popular - it can be pretty overwhelming at times!”

We live in a world where facts and fiction get blurred
In times of uncertainty you need journalism you can trust. For only R75 per month, you have access to a world of in-depth analyses, investigative journalism, top opinions and a range of features. Journalism strengthens democracy. Invest in the future today.
Subscribe to News24
Next on You
A look at how Toyko 2020 forged ahead regardless of all the challenges it faced