There’s Winnie Madikizela- Mandela – smiling and beautiful with her signature raised fist. Nelson Mandela beams as he stands nearby, clad in traditional Xhosa clothes with a bead headband.

The room is crowded with VIPs and South Africa’s former first couple aren’t the only ones who’ve been brought to life.

Albertina Sisulu has been resurrected here, and stepping into this studio is like walking into a convention of South African struggle icons.

The lifelike sculptures are the handiwork of Lungelo Gumede. The Durbanite is carving a name for himself as the only artist in South Africa who creates wax figures.

“I wanted my statues to look real,”  Lungelo says.

And by all accounts they do. Social media users were blown away by the accuracy and detail of Madikizela-Mandela’s wax statue – from the clothing right down to accessories such as her glasses and jewellery.

The sculptor shot to fame when he created her likeness ahead of an EFF motion to rename Cape Town International Airport in her honour.

The motion failed in parliament, but the artist won over new fans when he shared a picture of his artwork on Instagram.

“The female president we never had,” Lungelo captioned the snap. The 33-year-old wishes he’d met the icon, who died in April last year. Buthelezi is the only one of his prominent subjects he’s met face to face – he presented the politician with a wax figure of himself on his 90th birthday last year.

Buthelezi was bowled over by his wax clone, Lungelo says. So how does he make his statues look so real?

It’s all down to research. To capture someone’s true likeness, sculptors use information about their body and build.

“I have to find the exact height and weight of the person. I usually find such details on the internet.” The statues are adapted from photos, he adds.

“I research hundreds of photos and base the sculpture on an iconic image. This keeps the memory of the person fresh and alive in people’s minds.”

After obtaining all the relevant measurements he creates an armature, or skeleton, using wire. The wire figure is attached to a base so it stands upright, then Lungelo painstakingly fleshes out the sculpture by adding wax.

His studio is lined with paint, clay and artificial hands in various shades, which he uses to put the finishing touches on his figures. Then comes the fun part – dressing them.

“Each statue has a wardrobe full of designer clothes, shoes, jewellery and even beadwork,” Lungelo says. “I shop for them and every now and again I change them into different outfits. I make sure I dress them according to their timeline. For example, if a person lived in the 19th century it must show in their dress.”

It takes three to four weeks to make a statue, but it’s taken years of practice to perfect his art.

“The first wax statue I made was of Obed Mlaba, the former mayor of eThekwini municipality, in 2006. This was followed by Zulu King Goodwill Zwelithini’s statue. It took three to four months in total to make both.”

One of his sculptures, a bronze statue of Zulu King Cetshwayo, has pride of place outside the King Cetshwayo municipality offices in KwaZulu-Natal.

Lungelo, who sold the piece for a cool R750 000, prefers using wax because it’s more affordable. Depending on the subject, you could buy a custom wax statue for half the price, but the cost varies.

“For instance, people who lived in past centuries can be tricky and expensive to make because I have to find clothing from their era.” But Lungelo’s waxworks aren’t for sale. His passion is to preserve the art form, he says.

His interest was sparked by a visit to Madame Tussauds in New York in 2004. Lungelo, then a fine art student at Durban University of Technology (DUT), won the vice-chancellor’s excellence award and had been invited to exhibit his work in the Big Apple. He was mesmerised by the figures at the famous wax museum.

“For the first time I saw statues made of wax. When I came back home I realised no one was doing wax statues so I took the opportunity.”

And he hasn’t looked back. A string of accolades, including a mayor’s award of excellence, decorate the small office of his studio at BAT (Bartel Arts Trust) Centre in Durban. Lungelo, born in Ndwedwe, showed a flair for drawing at primary school and was often caught doodling.

“At first my schoolteachers thought I lacked attention in class,” he says. “They thought I was naughty, but later they realised I was trying to express myself through art.”

“My mother wanted me to study medicine but she didn’t have enough money to send me to medical school.”

He applied for bursaries to appease his mom but his heart wasn’t in medicine. Lungelo threw himself into drawing and his work caught the eye of fellow artist Mandla Gasa.

“He referred me to BAT Centre, where I graduated at the centre’s residency programme. Here I learnt about professional drawing and painting.” 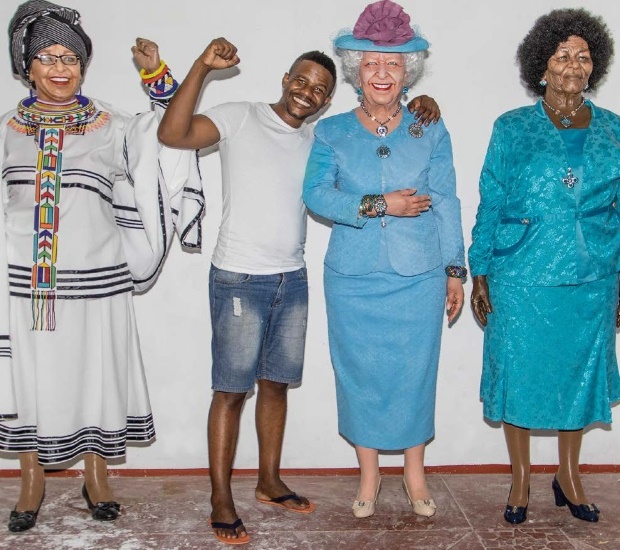 A year later Lungelo received a sponsorship from the centre, which supports local artists, to study fine art at DUT.

“In my first year I was introduced to sculpture, clay, art theory, communication and arts as a business.

In that same year I won the vice-chancellor’s award and started receiving invitations from overseas to exhibit my work. “Then I knew I wasn’t a doctor but an artist.”

Drawing takes up most of his days, leaving Lungelo little time to spend with his partner and two children, whom he prefers not to name.

He hopes they’ll be proud of the legacy he’s creating. He’s in negotiations with eThekwini municipality for a building to display his work to the public.

With more than 100 wax statues in storage, Lungelo longs to open his own  museum.

And if everything goes to plan, the Lungelo Wax Museum – the first of its kind in SA – will open its doors at the end of the year.

Read more on:
peopleartistwaxing
LATEST YOU