However, when President Cyril Ramaphosa announced plans for the lockdown of the country in March Sibusiso’s work travels came to a halt. And shortly thereafter the TV show host embarked on a journey of a different kind for the first time – applying for UIF.

“Most of my work entails going out to events,” Sibusiso shares. “However, weeks before the lockdown started organisers were beginning to cancel or postpone their events.”

Luckily for Sibusiso and his production team it was just before the car show’s latest season was meant to end and they managed to finish the final episodes through some clever editing, he recalls.

By the time the show wrapped up, most production companies had paused their productions or temporarily closed.

A jack-of-all-trades with years of experience in the entertainment industry, Sibusiso found himself unemployed and getting desperate.

As the weeks passed with no new job offers, he finally made a call to his father and was considering moving back home to ease the financial stress.

“My father listened to me and then finally responded by saying, ‘Why don’t you apply for UIF?’

“I was like, what on earth is that? And he sent me a link to a website.

“I didn’t know that there was an unemployment fund. I had no idea.” After reading up on what UIF is all about, Sibusiso proceeded to apply online.

“I got an SMS afterwards about a 35-day waiting period, and so the waiting began.”

The 35 days came and went, says Sibusiso. He turned to his dad for advice again.

“My dad said to go to the department of labour offices with my ID, proof of address and other things you usually need when you open a bank account,” Sibusiso says.

Sibusiso had checked online and according to the department’s website, the offices open at 7.30am and close at 4pm on weekdays. Sibusiso arrived at 7.20am – and was greeted by a shocking sight.

“Believe me when I tell you that at 7.20am, the line started at Standard Bank which is three blocks away from the actual building!”

Sibusiso took pictures while he waited and moved along in the queue.

He took one in the morning and another in the afternoon and posted them online –looking at the two pics it seemed not much movement had occurred.

“I was thinking nobody who has a job and who doesn’t need UIF will actually believe that I stood in a line that started at 7.30am – and I might not even make it [inside],” he said.

Sibusiso reached the department’s doors at 3.40pm, just as a security guard decided it was time to close them.

Sibusiso shot a video of him and others from the queue begging the guard not to close the doors.

But the security guard proceeded to lock up the premises.

I was frustrated, not only because of standing all day without eating but because there was a lady who came out a few times and took random people from the queue and we weren’t told why she was doing that, Sibusiso says.

“When my group finally got to the front, we were moved to another line that wasn’t attended to [either].”

Sibusiso and his group decided not to leave the premises until they had a word with the manager. But when the manager finally came to address them, he told them to come back the next day. 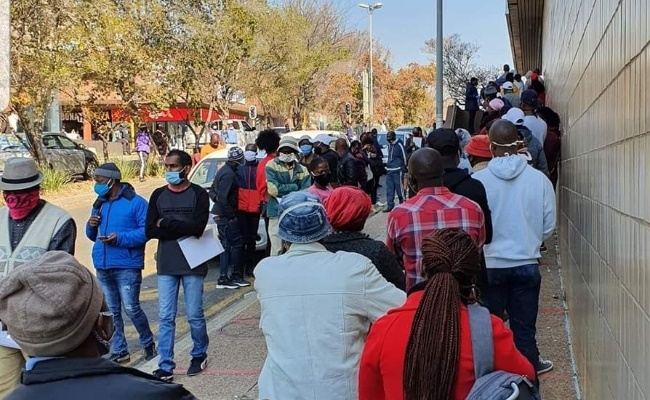 At 13:30 in the afternoon, the queue at Randburg Department of Labour still looks long and busy. (Photo: Supplied)

The group requested they be provided with numbers that would guarantee they’d indeed be seen the next day, and that they’d be helped first.

The manager said if they were given numbers it would be unfair because the system worked on a first-come, first-serve basis.

“Instead of waiting all day here for nothing I could have easily started a food business with some of my friends. At least then I would have had something to show for all my time spent here,” Sibusiso concluded after his first day.

The next day Sibusiso decided to try a different branch and went to Marlboro in Sandton. He got there at 7am this time.

“It was a far better experience,” he claims. “At 10am there was a lady who was counting everybody in the line. And when she got to a certain number, she told everybody after that number to go home because they were unlikely to be served.

“I was part of those counted.

“Then once you get in there, there’s another member of staff guiding you through the process.”

When this lady approached me she said she doesn’t see me holding any documents and asked why that was, Sibusiso says.

“I explained that I applied online and got an SMS. So, I’m here doing a follow-up to find out what’s going on with the progress of my application.” 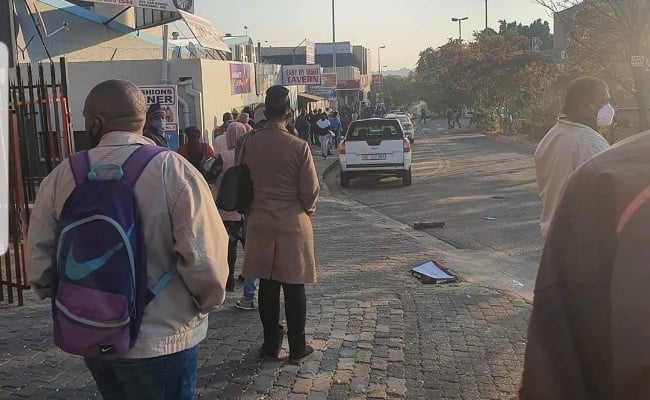 Sibusiso in the morning as he settled in the queue leading to the Department of Labour. (Photo: Supplied)

The lady took Sibusiso’s ID and went to a nearby office.

“She came back a few minutes later and said: ‘Just as I expected – there are no documents in your application.’

“The U19 form, salary schedules and a bank form is what I needed to conclude my application. She then told me to come back the next day because it was nearly closing time.”

“So, I decided to try this thing one last time – three times a charm!” he chuckles.

“The third time I wasn’t playing. I got there just before 6am. I was even confident enough to assist other people in the queue who were applying for the first time. I was certain I would be out by midday.”

This time, Sibusiso’s application process was going well until he was called to an office cubicle.

“I’d made a mistake on my bank form,” he sighs.

“I had to go all the way to Sandton City to the bank and sort that out. I managed to do all that and come back to finish the process because I’d arrived early that day – thank goodness!

“When I finished everything, the lady helping me advised me that next time I should rather come straight to the labour offices instead of pursuing the online route.” After handing over all the required documents just before 4pm, the woman told him his application had been approved, and he’d have to wait 35 days.

“Another 35 days?! But she quickly calmed me down and told me that they just say 35 days. It usually arrives way before then.”

Indeed, Sibusiso received his UIF payment within a week after that application process.

When asked what he learnt from his long UIF journey, he had this to say: “I learnt that there’s a lot I don’t know about my benefits and my rights as a citizen of this country. “And it’s because of my ignorance all these years that it had to all come down to this event when it was the worst time to learn.”

Since sharing his UIF journey on social media, former colleagues have called him for advice.

“I’ve learnt that knowledge is power. I know it sounds corny, but it’s the truth.”

I also learnt that when it comes to government it’s going to take as long as it will take, Sibusiso adds.

“Don’t fight the people at the labour offices. They’re just doing their job the only way they know how. So just wait in line like everyone else.”