Parents of a four-year-old boy from Johannesburg hope to raise awareness of his rare form of cancer as well as enough funds to put him on an experimental drug.

Candice Hamman (36) and Carel Janse van Vuuren (37) noticed earlier this year when their son, Owen van Vuuren, woke up that his left eye had a squint.

Candice said they were concerned and took him for eye tests, which confirmed he needed glasses.

While waiting for their boy’s new glasses, Owen’s parents started noticing a deterioration in his balance coupled with terrible mood swings.

The worried parents took him to six different doctors who all suspected an open space lesion or hole in his brain tissue.

Doctors advised the parents to get a CT scan done, but they had issues trying to sedate the young boy. During this time the national lockdown was implemented due to the coronavirus pandemic, and Candice and Carel were cautioned to stay away from hospitals for fear of contracting Covid-19.

After much strife, and the levelling down of lockdown measures to level 4, they were finally able to have a CT scan done at Charlotte Maxeke hospital in Joburg.

Owen was then transferred to Nelson Mandela Children’s Hospital where he had an MRI scan, and his parents were given the shocking diagnosis.

You may also like | Girl with rare condition that affects her features: 'I feel pretty'

“There is nothing in this world that could prepare you as a parent for this diagnosis,” Candice said.

“To try and put into words how I felt when I found out is a combination of so many feelings. It's beyond devastation.

“We were told that it’s the worst of the worst. You hear about this sort of thing happening to other people but would never think it could happen to you.” 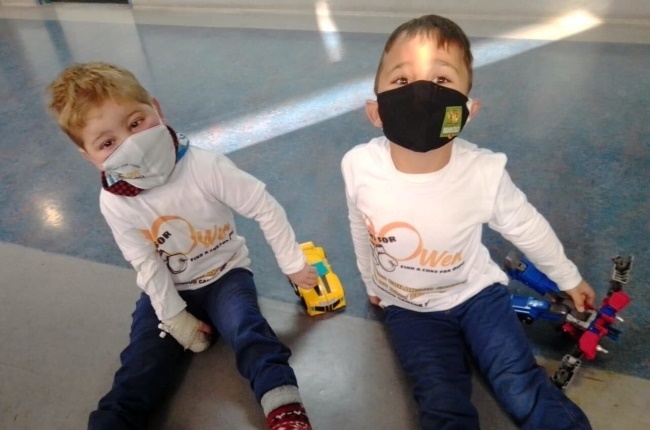 Owen started radiation therapy and Candice was told it would only work for a time.

“Owen has his days. Some good and other where we feel like we are back at square one.

“He has severe mood swings and gets increasingly frustrated when people don’t understand him.

Covid-19 impacted the family severely as Candice lost her job and she and Carel are now furiously attempting to raise enough funds on BackABuddy.co.za to get little Owen more treatment.

“I hardly sleep, I'm constantly researching everything I can to try and help Owen. Every day gets harder because at this point that he’s not getting any more treatment. I can't just accept it as that,” Candice said. “We’re fundraising in order to get Owen more radiation at a private hospital as well as to get a trial drug called ONC201 from the USA or Germany.

“Research into childhood cancer is very underfunded, to a point where in the past 30 years there’s been no progress on DIPG research.

“There’s no known cause or cure for DIPG and it can happen to anyone.”

If you would like to donate or aid the family’s cause, go to their BackABuddy page.

DIPG, or a diffuse intrinsic pontine glioma, is an aggressive type of childhood cancerous tumour that forms in the brainstem, the area at the base of the brain that connects it to the spine.

The brainstem controls most of the body’s basic functions, such as vision, hearing, speech, walking, eating, breathing and heart rate.

DIPG most often develops in children between five and nine years old, and is difficult to treat.

We live in a world where facts and fiction get blurred
In times of uncertainty you need journalism you can trust. For 14 free days, you can have access to a world of in-depth analyses, investigative journalism, top opinions and a range of features. Journalism strengthens democracy. Invest in the future today. Thereafter you will be billed R75 per month. You can cancel anytime and if you cancel within 14 days you won't be billed.
Subscribe to News24
Next on You
These Pretoria brothers are new to modelling but are already taking over Italian catwalks