Patient falls out of moving ambulance 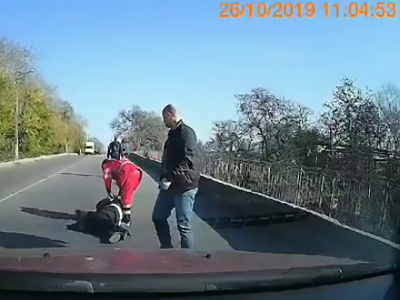 The patient can be seen lying on the tarmac as the driver continues to hoot before getting out and walking towards the man. (PHOTO: CEN/MAGAZINEFEATURES.CO.ZA

A patient accidentally fell out of a moving ambulance when the door swung open.

The shocking incident, which took place in the city of Novomoskovsk in eastern Ukraine, was recorded on the dashboard camera of a vehicle driving behind the ambulance.

In the video, the vehicle is driving down the road when the doors of the ambulance in front of it swing open.

The driver, in an attempt to get the ambulance’s attention, then hoots as he approaches a dark object on the road, which turns out to be the male patient.

The patient can be seen lying on the tarmac as the driver continues to hoot before getting out and walking towards the man.

Moments later two of the ambulance workers come towards the man.

The unidentified male patient ended up bruising his head, according to reports.

It remains unclear why he was being taken to hospital.

He eventually made it to a clinic accompanied by the police, local media outlets report.