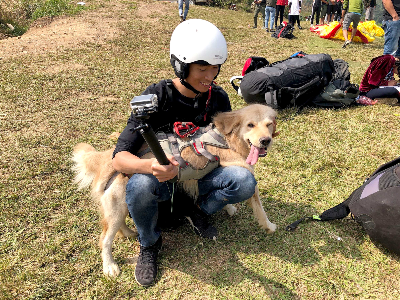 Pooch Pu a two-year-old golden retriever was filmed by his owner as he went paragliding for the first time (PHOTO: Getty Images/Gallo Images)

This hound took to the skies for the first time and it was all captured on camera.

Pooch Pu, a two-year-old golden retriever from Vietnam, was filmed by his owner, Phuong Le Duc as he went paragliding for the first time.

Professional filmmaker Phuong wanted to capture the monumental experience perfectly from the ground up and asked his friend Cong Mai, who’d never paraglided before either, to take the trip with his dog.

“I decided to let my friend fly with Pooch Pu because I wanted to shoot the scene from the ground, and Cong was happy to help me do that,” the 30-year-old explained.

Cong and Pooch’s experience of gliding through the air was captured on film.

“This was my first time paragliding, and Phuong asked me to do that with his dog so that he could shoot from the ground,” Cong said.

“In the end, it was a really fun moment both for me and the dog.”