This is the unique moment a leopardess appears to befriend a baby impala – even placing a gentle paw around its neck as if to embrace and kiss it.

The unusual encounter, which lasted up to an hour, was photographed by Reynard Moolman, senior game ranger at Pondoro Game Lodge in Greater Kruger National Park.

The 26-year-old discovered the predator, called Nkanyi, lying next to the vulnerable impala and watched in surprise as it appeared to caress and almost kiss the youngster rather than launch an immediate attack.

"The morning drive started off not too different from many we’ve had before,” Reynard explains.

"Not long after departure we got the call that Nkanyi was located on the property just south of us. Naturally, we made our way there.

"Expecting her to chase after a squirrel or scrub hare as she often does, we were surprised when we heard that she caught, but didn’t kill, a baby impala.”

As soon as they arrived, they spotted the impala but couldn’t find Nkanyi.

"It was then that we realised she was lying on her back, right next to the impala. It was clear that Nkanyi had no intention of ending her hunt any time soon.”

Reynard says the leopardess always worked with the rangers as an observer, but this time round something was different. 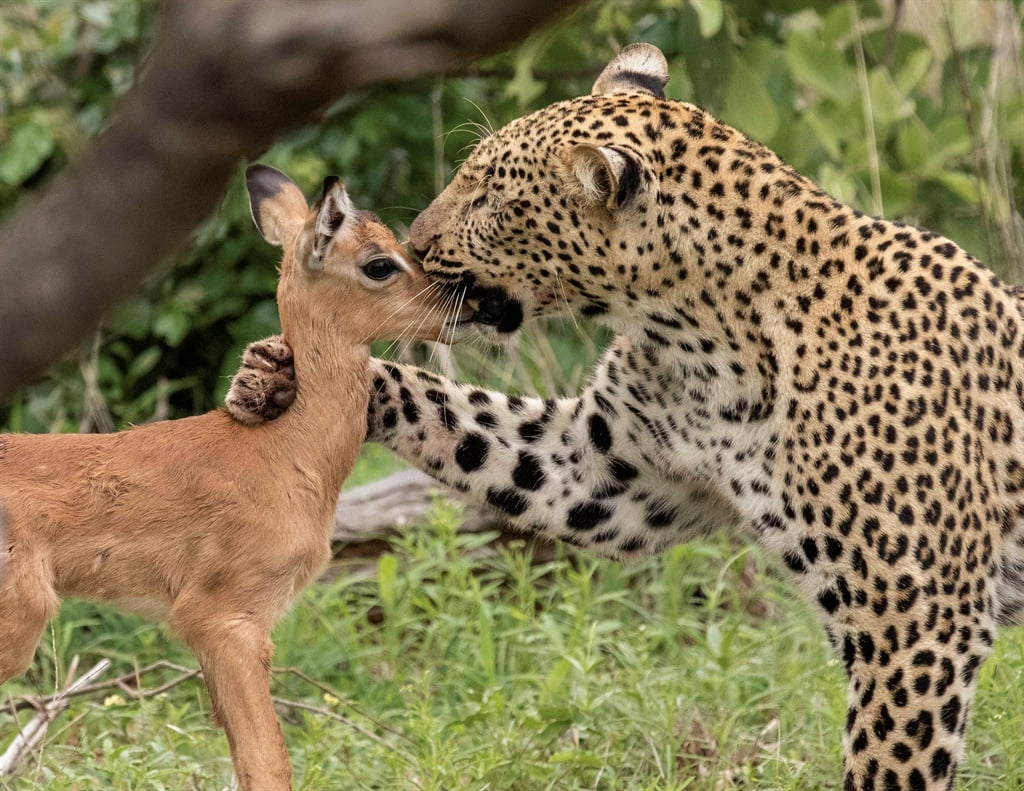 "We witnessed some behaviour that I personally have never even heard of before. She seemed to take the foot of the impala and almost taste it before it was yanked away.

"At points she even seemed to caress the impala, showing minimal aggression towards it.

"The only thing that I have ever seen that comes close to it, is a large domestic dog playing with a smaller one. This was obviously not the case.”

Following the unusual encounter, the baby impala made a bid for freedom but was eventually killed by the leopardess.

"We all knew what the outcome of this sighting would be. An adult female impala stood nearby alarm calling whilst watching this event unfold. It might have been the baby impala’s mother, but we would never know for sure.

"Between the crying bleats coming from the fawn, the calling of the adult nearby and the futile attempts at escape we were all a little heartbroken.

"Regardless of the fact that we know it is nature and animals get killed for others to survive, it was a tough pill to swallow."