Pretoria dad: ‘It’s a miracle my child lives – she was dead’ 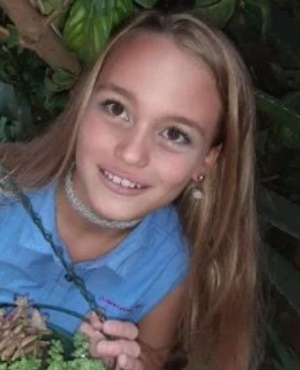 It’s a scene no parent should have to face – a hell no one wants to go through: your child’s lifeless body lying on the ground; her lips blue, her skin pale, like she’s no longer breathing . . .

Yet it was the shock picture that greeted Norman Erasmus at his Boschkop smallholding outside Pretoria when his daughter Tessa (12) was struck by lightning earlier in March.

It’s any parent’s worst nightmare, says Norman (39). But the worst day in the life of the Erasmus family also produced the greatest miracle: Tessa survived – and has fully recovered from the incident during which she deprived of oxygen for several minutes.

“It’s not something you can just forget. The anxiety and trauma stays with you for a very long time,” the dad of three says.

Norman says he and his wife, Gerda (33), and their kids, including also Larouchelle (15) and Nadia (5), are great animal lovers. This is why Tessa was up as early at 5am on the ill-fated Friday, 13 March, to feed her guinea pigs.

It was drizzling, Norman recalls, so Tessa had donned gumboots and raincoat before going outside. “Everyone was up and busy in and around the house. The next moment, out of the blue, there was  loud thunder. The ground literally shook – I’m not exaggerating,” Norman says.

That’s when he heard Gerda scream: “Where is Tessa!?”

Than stormed outside only to find their child’s lifeless body under a tree at the guinea pig cage, Norman says.

“I’m not an emergency services worker, but I checked immediately if she was breathing, if I could hear her heart beat or a pulse . . . there was nothing. It’s impossible to describe what’s going through your head. A million things, possibly more. Fear. Anger. Anxiety.

“I started heart massage and mouth-to-mouth resuscitation immediately. Her lips were blue; her skin a lifeless grey. I’m not an expert, but I can confirm beyond doubt: my daughter was definitely dead.”

While Norman was persisting with first aid, Gerda called the neighbours.

“At one pointed I moved Tessa’s body from the ground to one of the pool chairs; and then to the stoep table. One of our neighbours came to help. He looked and me and said: Jeez, mate, no . . . she’s dead.

”It’s the worst thing for any dad to hear. You’re tired and out of breath, but you don’t want to give up.” Their first aid didn’t go on for more than 15 minutes, Norman says.

“Later another neighbour also arrived. He took over the heart massaging and I kept going with the mouth-to-mouth. I asked the others whether I was crazy, whether I was imagining it because I wanted it so badly . .  but I wasn’t imagining it . . . she was alive again.”

Norman and Gerda raced to the Wilgers Hospital in Pretoria with Tessa.

She was admitted to the trauma unit and treated for burn wounds.

Afterwards she was referred to the burns unit at the Chris Hani Baragwanath Hospital in Johannesburg.

“They had to clean the burns on her arm and buttocks. My wife was present, and she says no mother should have to hear it . . . her child screaming in pain like that.”

Tessa’s remarkable recovery has left doctors speechless. According to experts, a lighting strike of that severity, technically, should have killed the girl. Or left her with severe internal and even brain damage.

But there was no sign of any of this. A neurologist confirmed Tessa has no brain damage and apart from swelling in her lungs, she’s suffered no internal damage. The burns on her arm and buttocks have already healed..

“She was discharged after spending a week in hospital. We took her back again later because she was suffering from post-traumatic stress.

“She still has some pain in her back and shoulder but she’s back to her old self. She’s misses school and plays with her sisters.

“She doesn’t remember a thing about the incident. But she remembers everything before and after as clear as daylight. She could name all her guinea pigs.”

The family are convinced Tessa’s recovery is “a miracle of the Lord”. They don’t have medical aid but say they’ve been supported every step of the way by loved ones and benefactors. Their hospital bills were settled by anonymous donors.

“We don’t just think it was the Lord’s work – we know it was. How could it have happened? I saw my child lying there. She wasn’t breathing – she was dead. And all along God was present. Throughout each worry about money and bills. Every step of her recovery process. We’re certain: miracles happen.”

Read more on:
miraclepretoria
LATEST YOU