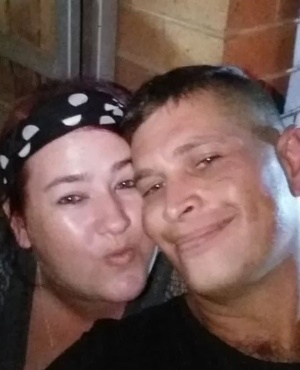 What was supposed to be a bit of pre-wedding fun turned into a nightmare when a Pretoria groom-to-be, who’d been “begging” on a street corner for cash for his upcoming wedding, was run over.

Jannie van Niekerk (34), the groom-to-be from Montana in northern Pretoria, is awaiting surgery to fix his broken bones.

Anelle Scholtz (35), Jannie’s fiancée, is struggling to come to terms with the incident that happened on Saturday on the corner of Sefako Makgatho Drive and Parsley Street.

Jannie, who’s in a lot of pain and disoriented, broke his left arm and leg in two places. All the ligaments at the back of his right leg are torn and he sustained a blow to the left temple.

He’s in Steve Biko Academic Hospital awaiting surgery to insert steel pins in his arm but has contracted an infection in the wounds in his back from where he was cut by broken glass, says Anelle.

“We’ve been engaged for such a long time but our finances meant we had to wait to get married. Jannie and I were so excited – I already have the wedding gown and everything ready. We just wouldn’t have been able to afford a honeymoon,” Anelle told YOU on Wednesday.

They’d been set to get married on 14 December in an intimate ceremony on Anelle’s parents’ smallholding in Montana. But now she doesn’t know what’s going to happen, says Anelle, who’s six-and-a-half months pregnant with their son.

Anelle has a son and daughter, 11 and nine years old respectively, from a previous marriage. The kids live with her and Jannie. Their father is deceased.

Jannie and Anelle have been engaged for two years and had wanted to get married before baby Bryan-Lee is born.

Their family and friends organised surprise parties for both of them – a kitchen tea for her and a bachelor’s party for him.

“Both Jannie and I had gone to work that morning,” says Anelle, who’s a junior bookkeeper at a décor rental business.

Anelle says she’d just finished work early in the afternoon when she found out about the kitchen tea. Jannie, who’s in the process of qualifying as an electrician, was also surprised when his friends showed up at the couple’s home. His friends dressed him in an orange tutu, a purple bra, and bunny ears and a tail. The “look” was completed with sunglasses and a fairy wand.

In the picture taken just before 3pm, when the boys headed out, Jannie smiles broadly at the camera.

“We’d just finished opening all the gifts [at the kitchen tea] when everyone started disappearing.”

She says a deathly silence fell over the party. “I suddenly felt icy cold. My mom was in the kitchen and started doing the dishes. I asked her, ‘Mom, what’s going on? Is Jannie okay?’ ”

Her mom couldn’t look her in the eye and told her to speak to her dad. “He told me Jannie had been hit by a car. I didn’t know how bad it was yet. I just started crying.”

She says the accident happened at around 3.30pm. She was later told Jannie had to be resuscitated at the scene. “They say there were no signs of life. A stranger laid his hand on Jannie and prayed for him, after which he regained consciousness. I wish I could thank that person.”

In her shocked state, Anelle says she thought Jannie was just going to get checked out at hospital. But at the hospital she realised Jannie was far worse off than she’d thought.

“It’s horrible seeing him suffer like this, being in so much pain,” she says.

The wedding is the least of her worries now. She hasn’t let the 60 wedding guests know yet that the couple will probably have to postpone the wedding. She believes Jannie’s friends reckoned collecting money at the traffic light would help cover some of the costs of the wedding.

“I don’t mind getting married in court but it’s Jannie’s first marriage. I’d wanted our wedding day to be a fairytale.”

She says it’s upsetting that some people on social media have accused Jannie of being “drunk” and saying he’d “been asking to get run over”.

“Really? Been asking for it? He’d been at work until 2pm. There’s no way he could’ve been drunk. It’s a terrible thing that’s happened but it was an accident,” Anelle says.

“I’ve been crying for days. I’ve been trying to stay strong but now I just can’t anymore. I worry about our future. Jannie had been looking forward to qualifying as an electrician in February. Now, we just don’t know what’s going to happen. I’m going on maternity leave soon and he won’t be returning to work for a long time. We’re going to suffer.”