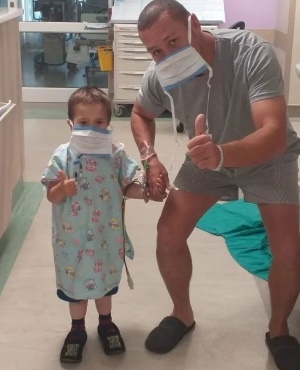 When Danie de Wet (45) overheard the father of six-year-old Conor van Baalen telling someone the little boy needed a kidney, he didn’t hesitate to offer one of his.

It’s now been two weeks since Danie, who lives in Newcastle in KwaZulu-Natal, donated his kidney to Conor. But it took more than a year to get the transplant approved.

“When I heard Conor needed a kidney, I turned around, interrupted Hennie and said he could have one of my kidneys,” Danie tells YOU.

Conor’s mom, Sane, says she couldn’t believe what she heard.

“Conor has a genetic kidney disease that causes his own immune system to attack his kidneys. We noticed something was wrong with him when he was 18 months old and had tests done,” she says.

Conor is one of a set of twins. He also has two older brothers, of which the eldest is 20 years old.

“None of the other boys have the condition. I’ve always said Conor was my strongest baby but last December [before the transplant] he’d become so weak that he struggled climbing the stairs at our home,” Sane says.

A month after Danie offered to donate his kidney, Conor’s parents called him and asked if he’d been serious with the offer.

“I was deadly serious. My whole family supported my decision. When my daughter, Dannel, was 17 years old, she had to have heart surgery, so I know how hard it is when your child is ill,” Danie says.

Danie had to undergo several medical tests over the course of a year to make sure he’s healthy enough to donate a kidney.

“Because he’s not family, the health department had to approve the transplant,” Sane says. “We’re lucky it could happen so quickly. Because Conor’s condition is genetic, none of us – me, my husband and our other sons – were eligible to donate a kidney.”

“They told us we were looking at a waiting period of about eight years. When his kidneys started failing he was put on three hours of dialysis a day before his transplant,” she says.

“He got tired so quickly. We’d hoped he could start school with his brother but the permission for the transplant took time and Conor wasn’t able to go.”

The Van Baalens are hoping that Conor can join his brother at school in three months’ time.

“He’s already looking healthier. Before the transplant, you could see he was sickly. He received Danie’s kidney two weeks ago and was discharged from hospital yesterday. He feels good and he’s doing well. He tells me Danie is his best friend,” Sane chuckles.

Danie says he visited Conor daily, including when they were both in the Morningside Clinic in Johannesburg.

“I said I was going to visit my left kidney. Conor is part of me now, or rather, I’m part of Conor. He’s a special little boy,” Danie says.

“I’m a little sore and I’m not allowed to wrestle for the next year but it’s all worth it,” he tells YOU.

Though Conor will probably never be a wrestler, Sane hopes he’ll at least have a normal childhood. “He’s like a grownup in a child’s body. It shouldn’t be like that. He shouldn’t have to worry about hospitals and stuff. Though he won’t be able to wrestle, he’ll hopefully be able to do something like swimming,” she says.

“Even if I’ve just given him another five healthy years, it’s still worth it,” Danie reckons.

Sane says she’ll be forever grateful to the “stranger” who gave their son his kidney.

“I want to encourage people to register as organ donors. You can help so many people – your impact can be enormous,” she adds.

Read more on:
transplant
LATEST YOU