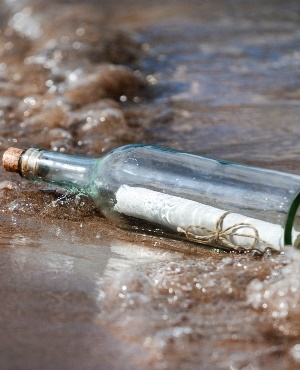 A teenager’s Twitter post has gone viral after he got a response from someone who read the message in a bottle he’d tossed in the Atlantic Ocean nine years ago.

Max Vredenburgh from Massachusetts in the US was only 10 years old when he threw the bottle in the ocean and was shocked when he finally got a response.

The young man shared the exciting news on Twitter recently.

In the letter, Max introduced himself and shared with the would-be reader what he likes.

“Hello, my name is Max whoever is reading this letter please write back at . . . I’ll tell you a little about myself. I am 10 years old, I like apples, I like the beach, my favourite colour is blue, I like animals, I like cars and I like outer space. Please write back,” he said.

His parents received a letter in the mail from the man who found his note on a beach in France between Contis and Mimizan, according to CBS Boston.

On August 21, 2010 I threw a message in a bottle into the ocean from a beach in Rockport, MA. On October 10, 2019 that letter was found on the beach in France. I am mind blown. 9 years. pic.twitter.com/Af2tEwoQtq

“When I first read his letter, my heart, my stomach just dropped. I was like, ‘Oh my God. My 10-year-old wish just came true. This is insane’,” he told the publication.

The gentleman who found the message in the bottle said it would have taken nine years to cover the 6 000km that separate them and said Max would have grown a lot during that time.

He also included a map to locate him.

It also appears that the two have already made contact via social media.

Max thanked him for writing back.

“I just want to thank you so much, man, for writing back! The story would have ended right when I threw the bottle.”

And while so many have shared about how sweet the story is, some were concerned about pollution and litter.

“I always wanted to do this as a kid, but I was scared that the whales might eat the bottle and die lmaooo,” another Twitter user wrote.

“I can’t believe. All the negative comments!” another user said. “This is the sweetest thing and no, when he was ten, he was not thinking about pollution or whales; ten-year-olds get a pass! Some of these commenters must leave negative messages on kitten videos.”