Dean Oosthuizen (25) is at home after being in a helicopter crash (Photo: Supplied)

It's been less than two weeks since Dean Oosthuizen (25), a farmer from Limpopo, was in a helicopter crash. He says he still can't believe he survived.

Dean and Coena Smith (69) had been catching game for a client on a farm near Alldays in Limpopo on Tuesday 30 July when the crash occurred.

Coena died in the crash, while Dean was discharged from hospital this past Friday. Dean suffered serious injuries to his right hand and back.

Dean tells YOU he and Coena had been herding eland with the helicopter when they started hearing a strange vibration in the engine.

"Coena reckoned there was a blockage in the petrol tube. The next moment we started spinning," Dean recalls.

Dean, himself a helicopter pilot, says he suspects the helicopters tail rotor had failed.

"I was flung through the front windscreen [on impact] because my safety belt snapped. I woke up lying on my stomach in the grass. I could hear flames crackling," he says.

Dean managed to get Coena, who was still alive, out of the burning helicopter. Coena complained of pain in his chest. He died later in hospital.

"I lost consciousness and woke up when my people were driving me to hospital."

Dean was transferred to Life Groenkloof Hospital in Pretoria, where surgery was performed on his back and hand. "I can walk again. Every day is a bit better," he says.

But the accident still haunts him, he adds. 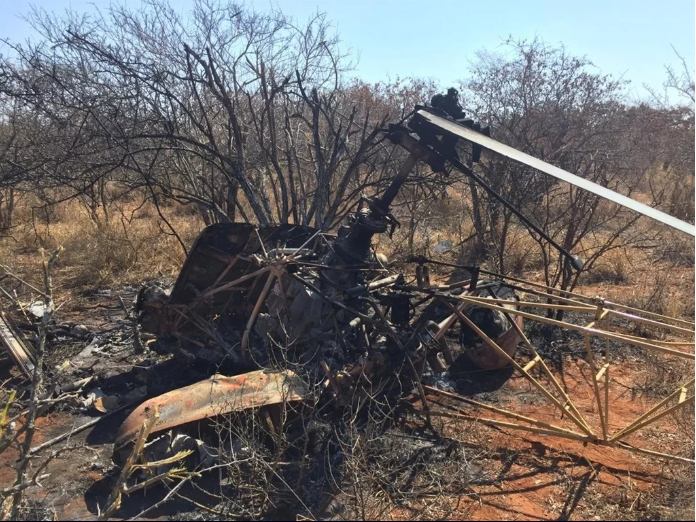 Remains of the helicopter crash. (Supplied)

"I replay the accident in my mind over and over. I visited the accident scene today [Monday] for the first time. I don't know how I'm still alive. If the helicopter had landed a little to the left or right, it would’ve been in long, dry grass and the fire would've spread quickly. If my seatbelt hadn't snapped, I might've lost consciousness. I'm grateful to be alive."

Dean says he worked with Coena often and will miss him.

Coena had been honoured in the past by the National Sea Rescue Institute for saving 11 people who'd been trapped in Limpop's Mogol River.

We live in a world where facts and fiction get blurred
In times of uncertainty you need journalism you can trust. For only R75 per month, you have access to a world of in-depth analyses, investigative journalism, top opinions and a range of features. Journalism strengthens democracy. Invest in the future today.
Subscribe to News24
Related Links
PICS: Hot air balloon crash-lands in Soshanguve
Free State woman and her terrified Labrador reunited after crash
SANDF: Helicopter crashed after assisting in training exercise
Next on You
When her ex refused to pay out her settlement, this Russian divorcée decided to sue their vengeful son