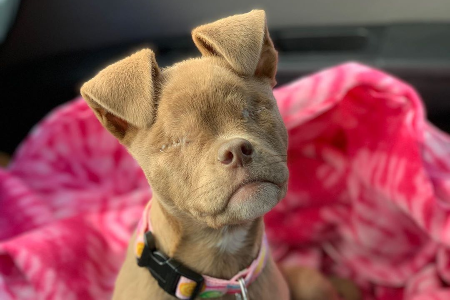 One-year-old Puddin was born with eyes but due to horrific neglect her eyes had to be surgically removed (Photo: ASIA WIRE/MAGAZINEFEATURES.CO.ZA).

This pooch has found a new best friend and fur-ever home after suffering abuse and neglect that left her blind.

Cute pictures show one-year-old Puddin adorably loving life, playing fetch, toying with a cloth stuck on her head, and snuggling up with new owner Cory Gonzales (23), from Texas in the US.

The terrier mix was born with eyes but due to horrific neglect her eyes had to be surgically removed and her eye-sockets sewn shut.

While it is unknown what caused the poor pup’s diseased eyes, the Society for the Prevention of Cruelty to Animals of Texas (SCPA) had to take the case to court to rescue the mistreated mutt when she was six weeks old.

“She either was scratched during play or maybe got into something worse. Her owners sought medical help so late that it progressed and got pretty severe,” Cory explains.

“They let it get so bad before going to the vets that animal control was called to see if they could help. When asked to hand Puddin over, the neglectful owners refused, so a long legal battle began.”

Though Puddin rescued, her eyes couldn’t be saved.

“All I know is that Puddin was the name the SPCA of Texas gave her when they rescued her,” Cory says of his new furbaby.

Puddin isn’t letting a lack of sight get her down. Her Instagram profile shows a happy-go-lucky pup living her best life, from plying on the beach to looking cool in pink sunglasses.

It was love at first sight for Cory, who first spotted Puddin in an online adoption add when she was four months old.

“I think just because a dog needs special attention or has special needs doesn’t mean it’s going to be any more different or difficult than raising a typically developing dog,” he says about his decision to adopt her.

He’s now on a mission to encourage people to adopt and not shop for pets, as well as raising awareness that even physically impaired pets can be a perfect fit.

“We haven’t had any added challenges with Puddin other than working on additional commands such as ‘watch out’ or ‘up’ and ‘down’ for stairs.”

We live in a world where facts and fiction get blurred
In times of uncertainty you need journalism you can trust. For only R75 per month, you have access to a world of in-depth analyses, investigative journalism, top opinions and a range of features. Journalism strengthens democracy. Invest in the future today.
Subscribe to News24
Next on You
He returned to Hawaii for me – then he was killed: Lindani Miyeni’s widow opens up