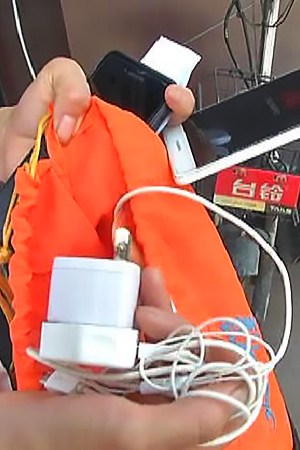 The 13-year-old was holding his phone which was plugged into a wall socket when he was electrocuted (Photo: ASIA WIRE/MAGAZINEFEATURES.CO.ZA).

Harrowing CCTV footage has gone viral of a teenager getting electrocuted while holding his cellphone.

In the video taken in a restaurant in East China, the boy is seen clutching his Huawei phone in his hands moments before he was electrocuted.

The 13-year-old, who’s since been identified just as Liu, can be seen sitting in a booth dressed in a bright green T-shirt and holding his phone, which is plugged into a wall socket.

Seconds later Liu’s body jolts and he becomes totally rigid as he’s apparently getting an electric shock from the smartphone.

Later he slumps back in his seat – still with the phone in his hands – as his friend walks over to check on him.

According to reports, Liu was pronounced dead at a local hospital after doctors twice tried to revive him.

Paramedics confirmed he’d died of an electric shock which stopped his heart.

Investigations are continuing as authorities try to determine whether the shock came from the cellphone, the charging cable or the wall socket.

It’s not known whether the boy's parents are taking legal action.