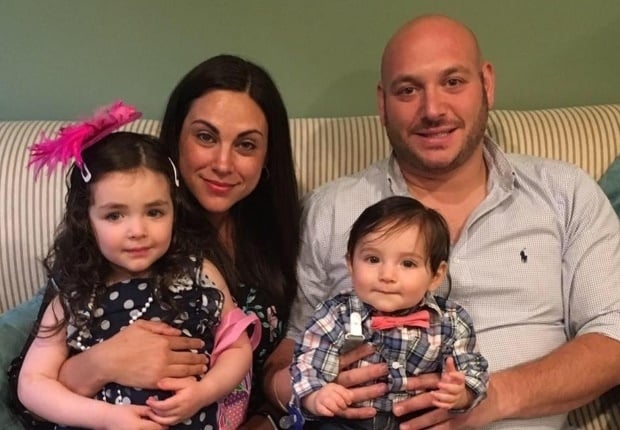 Sadly,Yoni’s condition didn’t improve and he passed away on 20 April with Jenn at his bedside. (Photo: GoFundMe page)

This family are mourning the loss of a husband and father.

After weeks of coughing, the father of two who had no underlying conditions went to Stony Brook Hospital in early March, where he tested positive for Covid-19, People reports.

He remained in the hospital for a few days, but then appeared to be getting better and returned home.

But just six days later Yoni’s condition deteriorated again and his wife found herself driving him back to the hospital, where she’s employed as a psychiatric social worker.

Sadly, Yoni’s condition didn’t improve and he passed away on 20 April with Jenn at his bedside.

Life without Yoni has created a new reality for the family and Jenn finds it difficult to look back on events without getting emotional. She said one of the toughest moments was having to see Yoni’s grandfather bury his grandson, New York Post reports.

“His grandfather lost his entire immediate family in Auschwitz when he was a young boy," Jenn explains.

“One of the most devastating things about that day for me was him sitting there having to watch his grandson – who he was so close to – be buried.

“After going through so much unimaginable tragedy in his life to now have to see this.

“He was so proud of Yoni and they spoke all the time.”

Jenn tries to cope with her loss by remembering her husband’s positive characteristics.

“He was so genuine. He had the ability to walk into any room and light it up and could connect with anyone, no matter what their background was," she says.

“He loved me so much. There was a connection there that I never had with anyone else before. The kind of love that we had, it was almost like we were put on this Earth for each other.”

The mom-of-two also revealed that it’s been tough on her children, three-year-old Bella and one-year-old Noah. However, the little girl has been a source of comfort to her mom.

“There are nights where I lay with her and cry – because to me she needs to see my emotions too and know that I'm sad about it  — and she'll say, ‘Why are you crying?’ and I'll say, ‘I miss Aba [dad in Hebrew]. I'm thinking about him’.

“And she'll cup my face with her hands, and she'll say 'It's okay, Mommy, Aba's in heaven, and in our hearts and our heads,’” Jenn said.

She wants people to understand how dangerous the virus is, especially as many counties plan to reopen in the coming days and weeks.

Jenn, who started a GoFundMe page to help pay for Yoni’s funeral, fears that it’s too soon as the pandemic is not quite over

"I wouldn’t wish this upon anyone else in the world and it's happening every day all over the country," Jenn said continues.

"Until we find a way to eradicate this virus, we need to continue social distancing and keep as many things shut down as we can."

“You take a lot of things for granted and then all of a sudden something like this happens. You're totally blindsided. I just wish we could go back somehow and change it.”