Two learners at Hoërskool Brandwag in Uitenhage in the Eastern Cape broke their necks in two unrelated accidents this year.

One mother was lucky enough to welcome her son home this week knowing he’ll probably be making a full recovery. But another family has had to accept the fact that life for them won’t be the same.

Morné van der Berg (15) was discharged from hospital on Monday after being in a serious car accident in July. But Dano Swart (18) was less lucky. He’s now a quadriplegic and still in the Aurora Rehabilitation Hospital in Port Elizabeth.

It’s every parent’s natural instinct to protect their offspring. But on the morning of 26 July, when a white bakkie ran the stop street between Preller Way and Albertyn Lane in Uitenhage, Sonica van der Berg (35), Morné’s mom, could’ve done nothing to prevent the accident.

“Your thoughts keep jumping to what you could’ve done differently. If only I’d left earlier that morning, or perhaps I could’ve swerved . . .

The bakkie hit the passenger side of their vehicle at speed, leaving Morné, a top athlete, with two fractured neck vertebrae and a broken arm.

On 14 August, after spending two weeks in traction, Morné’s neck was operated on. He was discharged about a week later.

“Since he’s been home . . . I managed to sleep through the night. My body’s always tired. But I’ve been more at peace since he’s been sleeping in his own bed,” Sonica says.

“Morné’s able to walk – but not for long as he gets dizzy and his back still aches at times. He has to get physiotherapy twice a week and he’s been given light exercises to do at home to strengthen his muscles,” says Sonica, who’s a stay-at-home mom.

Morné was excited to be discharged on Monday and he wanted to walk out of the hospital on his own. “The doctors had wanted to organise him a wheelchair but he insisted on walking out.” 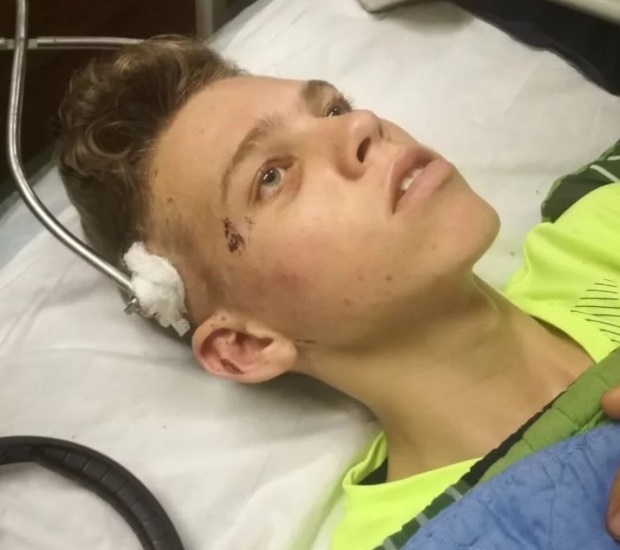 On the morning of the accident, Sonica was on her way to drop off her youngest son, Henré (11), at Laerskool Handhaaf. She was going to drop Morné off at his high school after that.

Henré wasn’t seriously injured and just had a few minor lacerations on his face. “Since his brother [Morné] has been able to move, Henré doesn’t get nightmares anymore,” Sonica says. “He dreamt a few times his brother had lost his legs.”

Though they’re all grateful Morné’s alive, it was a blow for the young athlete, who dreams of a career as a cross-country athlete. He won a merit award for cross-country running in 2018. Morné is also a member of the Eastern Cape U14 team that’s taking part in the South African Cross Country Championships on 8 September in Pretoria. Unfortunately, he won’t be joining the team.

“He needs to wear a neck brace for another six weeks and maybe he can start training again in about 12 weeks from now,” Sonica says. “He was very emotional and cried every day [at the thought of] missing the championships because he’d trained so hard for them.” 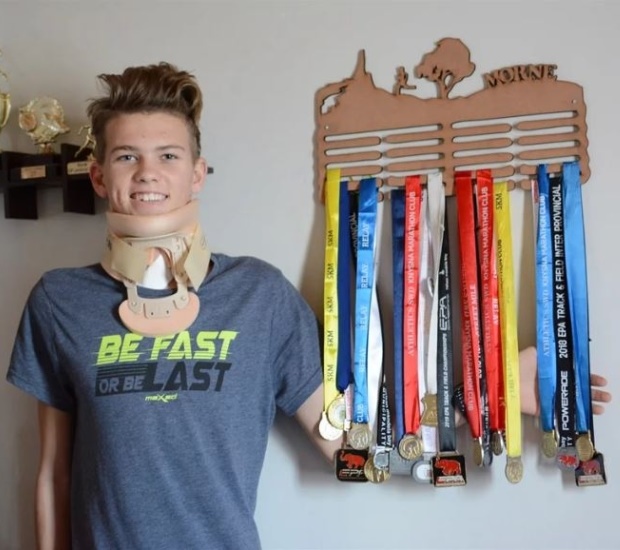 Though he won’t be able to compete, Morné wants to travel to Pretoria to support his team mates.

“I’m trying to focus on the future because things could’ve been so different. He damaged the same vertebrae as Dano Swart, and Dano is paralysed,” Sonica says.

A few months before Morné’s accident Dano, the vice-captain of Hoërskool Brandwag’s first rugby team, injured his neck too.

On 7 May Dano was playing in a rugby game at Hoërskool Framesby on 7 May when another player tackled him on his way to the goal posts.

“It’s frustrating because he still has problems with his lungs. He recently contracted another infection and had to be put on antibiotics,” says Karen Pienaar, Brandwag’s spokesperson.

Dano, who has only limited use of his arms, is being cared for in the rehabilitation hospital where he’s being taught how to get along with just his arms – and even this will require expensive equipment.

“His trachea has since been replaced with another valve and he’s not permanently on oxygen anymore,” Karen says. “But they [medical personnel] still have to clear mucus with the valve.”

It’s unclear when Dano will get to go home.

Read more on:
quadrigaboys
LATEST YOU