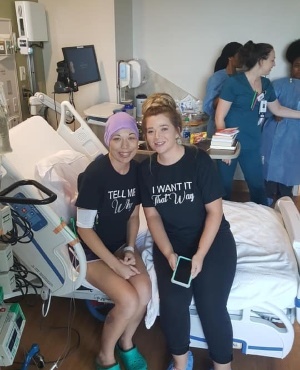 A group of nurses found out one of their patients who has cancer was missing a Backstreet Boys concert because of her illness, so they decided to bring the concert to her.

Amanda Coley (36), from Atlanta in the US, was diagnosed with leukemia just three weeks before she was set to see the Backstreet Boys in concert. The 36-year-old has loved the famous boy band since she was a teenager, PEOPLE reports.

The mother of four and her sister, Maggie Kingston (25), were delighted on Christmas Day last year when their husbands gifted them with tickets to the band's show in August this year.

The sisters waited eagerly for the big day but their dreams were crushed when Amanda found out about her cancer diagnosis.

"We found out about three weeks ago that Amanda had leukemia," her sister said.

"She was like, 'So I can't go to the Backstreet Boys concert?' That was the first thing she said. She was crying. Both of us are huge fans. She told me I should go. But I said, 'I'm not gonna go if you don't go!'"

Maggie then recruited Amanda's best friend and the nursing staff at Northside Hospital = where Amanda was admitted - to team up and plan a small surprise party in her hospital room, CNN reports.

The nurses danced and sang songs by the Backstreet Boys, performing three of the band's hit songs while Amanda sang along.

"I was crying! It was really emotional. We didn't expect it. We were just in awe," Maggie said.

"Amanda danced with them. She was in heaven. She said it was really cool and emotional. She shed a couple of happy tears."

Maggie posted videos of the special moment along with photos to Facebook, which even caught the attention of Backstreet Boy Nick Carter. "We missed you last night Amanda! Looks (and sounds) like you have a great team helping you get better," he tweeted a day after the concert.

We live in a world where facts and fiction get blurred
In times of uncertainty you need journalism you can trust. For only R75 per month, you have access to a world of in-depth analyses, investigative journalism, top opinions and a range of features. Journalism strengthens democracy. Invest in the future today.
Subscribe to News24
Related Links
Woman finds heart-warming message on her fast-food receipt
WATCH: Huawei Taco-ver: Mexican restaurant offers free tacos to Huawei owners after US ban
Heroic man catches toddler falling from balcony
Next on You
Inside the mind of a looter: experts explain the motives behind the mayhem