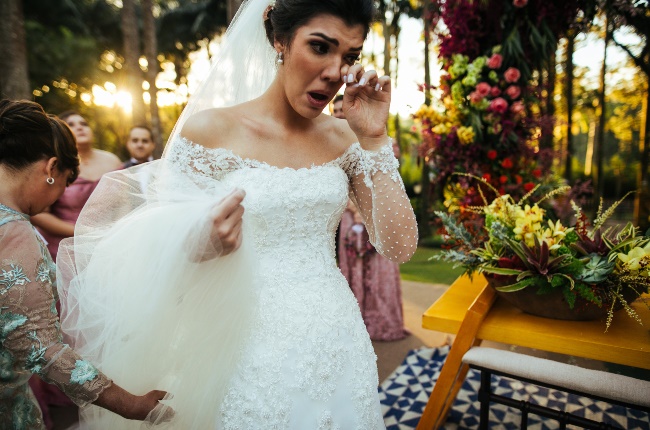 GATECRASHERS are nothing new at weddings. There’s often someone who can’t bear the thought of being left out and sneaks in to share the fun and festivities. But one woman really takes the wedding cake – and the punch she packed is making headlines around the world.

Picture the scene: the bride and groom, who are from Detroit, Michigan in the US, were all set to say their I do’s when an uninvited woman pushed through the guests, made her way to the altar – and promptly declared she had a very good reason why this man and woman should not be joined in holy matrimony. She was having the groom’s baby, she claimed.

One of the guests seized the chance to record the dramatic scene and shared it to TikTok. The action-packed clip shows the couple standing under an arch surrounded by their wedding party.

As the marriage officiant reads their vows, the angry intruder approaches the group from behind the ornate arch and begins berating the groom.

“Anthony! You pretend you didn't know me? Didn't get your psych med today?” she yells.

The minister blatantly ignores her and continues with the vows while guests audibly gasp at the drama of it all.

“Oh no. Oh my God!” one of the shocked guests’ whispers.

The scorned woman isn’t impressed with the lack of attention and makes sure the groom hears what she has to say.

“Anthony, I know you hear me!” she continues.

At this moment, the bride’s daughter comes forward and flings her flowers at the gatecrasher.

“You better get out of my mama's wedding,” the bride’s daughter shouts in the video, which has been viewed more than 10 million times on TikTok.

Viewers weighed in, of course. “Her daughter was not playinggg,” one commenter wrote below the post.

Talk about starting life off with a bang of the wrong sort.

We live in a world where facts and fiction get blurred
In times of uncertainty you need journalism you can trust. For 14 free days, you can have access to a world of in-depth analyses, investigative journalism, top opinions and a range of features. Journalism strengthens democracy. Invest in the future today. Thereafter you will be billed R75 per month. You can cancel anytime and if you cancel within 14 days you won't be billed.
Subscribe to News24
Related Links
Lockdown wedding: ‘We cut our budget from R70 000 to R2 500’
Woman slammed for ‘upstaging’ bride and groom before their first kiss
No wedding venue, no problem! Cape Town couple celebrate a drive-by wedding
Next on You
Petition to get pit bulls banned in South Africa: the emotion, the stats, the facts