Weight loss transformation: ‘I lost 25kg by running after doctors told me I was at risk of suffering a heart attack’ When Dharfeur Hendricks found out he was at risk of having a heart attack at the age of 21, he knew he had to change his lifestyle.

Speaking to YOU, the now 24-year-old from Cape Town got candid about growing up as an overweight child and his transition into a healthier lifestyle.

“I come from a family with common heart diseases and heart problems,” Dharfeur tells us.

Growing up, Dharfeur was frequently bullied about his weight in primary school and would turn to comfort eating.

“Food became my coping mechanism and my weight throughout my school life increased drastically – I went from 80kg to weighing around 100kg,” he says.

“I had difficulty walking up a flight of stairs and in addition to the health hazard I was causing myself, I knew I had to make some lifestyle changes.”

A regular visit to the doctor changed his life forever. “The doctor told me that I was at risk of suffering a heart attack because of my weight,” he recalls.

Dharfeur then decided to drop a few foods from his diet.

“I cut out sugar completely and substituted it with honey instead,” he says.

“I also cut out carbs and used an app to measure my calorie intake per meal. I went from having at least four meals a day with snacks in between to three.”

More than anything, Dharfeur wanted to make his new life more than just about weight loss.

“I try to maintain a balanced lifestyle and I had to do it for myself. I didn’t want to just lose weight but to become physically fit too. I wanted to maintain my weight and be healthy,” he adds.

Since joining the Adidas Runners club in Cape Town, maintaining a strict diet and regularly exercising, Dharfeur has lost 25kg.

“I had to remind myself that I’m doing this for myself,” he says.

“For anyone out there looking to make a lifestyle transition, I’d recommend setting goals because 50% of the work starts in the mind – you have to believe you can do it. 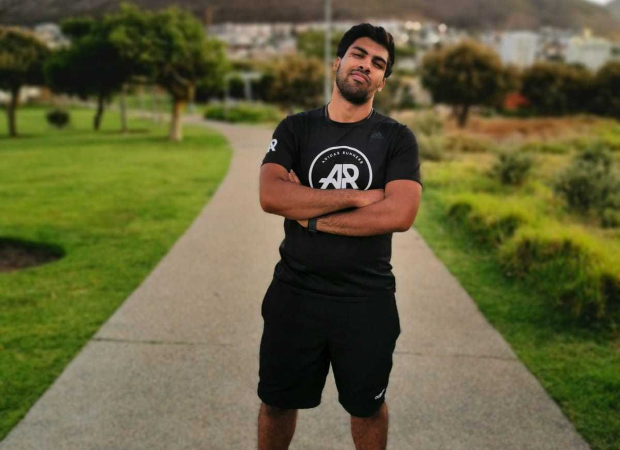 “It’s also so important not to give up, you might’ve only lost 500g in a week but at least you’re 500g lighter and that’s something to work with. Let that fuel you for your next goal.”

During lockdown level five Dharfeur couldn’t leave his home for a run but he would regularly run in his yard.

“I’d run around in circles and although it’s a really small space I was getting in some physical exercise.”

While the restrictions under level four of the lockdown allow people to run within a 5km radius of their homes, Dharfeur and his running crew still can’t be together physically so they virtually keep track of each other’s progress every day.

“It creates a sense of togetherness even though we’re apart,” he says.