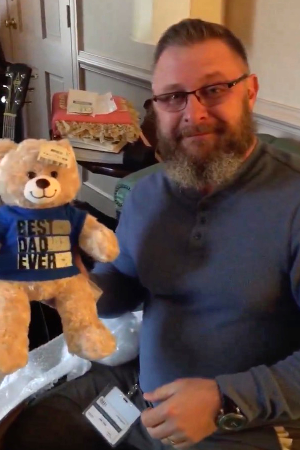 This dad couldn’t hold back his tears when he heard his late son's recorded heartbeat coming from inside a teddy bear.

Stephanie and John Reid from Virginia in the US lost their 16-year-old son, Dakota, in January last year after he was involved in a serious car accident that left him braindead. And when the couple received an expected and thoughtful gift from their son's heart recipient, the still-grieving dad broke down.

Following their son’s death the family discussed organ donation. “I overheard my niece talking about a friend who had a 19-year-old son on dialysis,” John said, recalling the moment that led to his decision to donate his son's organs.

“I ran down the hallway to catch the organ donor lady to ask if we could select someone for a kidney.”

On 25 January 2019, the family bid farewell to their son as he underwent an operation for his organs to be recovered and donated.

“We’ve received letters from multiple recipients, such as a 21-year-old thanking us for Dakota’s corneas as he could now see for the first time. We’ve received another letter from a farmer who got a kidney and pancreas,” John said.

John and Stephanie also more recently received a message from a young woman, the daughter of the man who’d received Dakota’s heart – Robert O’Conner. John immediately called to talk to the man whose life was saved by his son’s heart.

On 5 February this year, a month after their heartfelt telephone conversation, a package arrived at the family's home containing a smiling teddy bear.

The gift had been made and sent to the family by Bob, who had, at his one-year heart checkup, arranged for the echocardiogram team to copy a recording of his heartbeat so he could put it inside the bear.

In a video captured by Stephanie, John looks lovingly at the gift, tenderly holding the bear close as he breaks down hearing his son’s heartbeat.